It’s old news that MGM/UA Entertainment is remaking the 1984 film “Red Dawn” with the help of director Dan Bradley. But now, we have a look at the next teens to fill the commando boots. 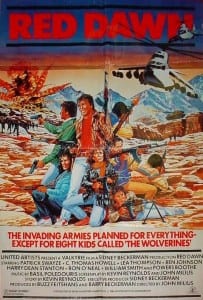 Some of these names probably look familiar, and for good reason. Connor Cruise is the son of Tom Cruise and Nicole Kidman and played a young Will Smith in “Seven Pounds.” Josh Peck is one of the stars of Nickelodeon’s “Drake and Josh.” And while the other names might not stand out, these rising teen stars are hardly unknown. Hutcherson starred in “Journey to the Center of the Earth” and “Bridge to Terabithia,” Lucas was recently seen as the Deceptacon vixen attempting to seduce Sam in “Transformers: Revenge of the Fallen,” Hodge has a recurring role on Fox’s “Mental,” Hemsworth played Captain Kirk’s father in the new “Star Trek” movie, and Palicki plays Tyra in “Friday Night Lights.”

Together, they will follow in the footsteps of the likes of Charlie Sheen, Brad Savage, Patrick Swayze, Jennifer Grey and others; and fight off Chinese and Russian insurgents. Soon, they will undergo military training to prepare for the rigors of a highly violent war movie and hopefully give their roles authenticity. Filming will begin in next month and the release date is currently set for September 24, 2010.