Yes, the rumors are true. In Prototype (from Activision and Radical Entertainment) you can destroy a helicopter by leaping a million feet in the air and karate kicking it. You can also throw things at helicopters: air conditioning units, soldiers, cars, zombies and, of course, other helicopters. You can even disguise yourself as a civilian or soldier, sneak up on a helicopter, and ninja it out of the sky. As your powers grow, your strength and lethality increase, which allows for more efficient destruction (which is beneficial for as the game progresses so do the number of helicopters that attack you at once), and eventually you won’t even have to stop running or even slow down to pick up some vehicle etc. and fling it skyward. There are even indicators on the screen that tell you where the nearest helicopters are that require destruction, and that’s not even part of your powers; it’s just courtesy of the programmers. In fact, a large portion of the gameplay in Prototype and, lets face it, the reason I wanted to play it from the time I saw the first trailer, is geared towards savaging unsuspecting helicopters in increasingly horrific (i.e. epic) ways. After that, it gets boring. 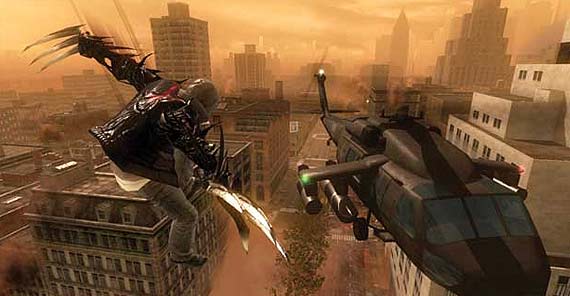 The game begins with a fully-powered Alex Mercer rampaging around a New York‚  infested with zombies, infected with some kind of creeping tentacle mold and swarming with unfriendly soldiers from a branch of the military called Blackwatch. The commonality between all these bad guys is the subject of a conspiracy that drives the narrative of the whole campaign, but up front, the important thing is they’re all trying to kill you: is no mean feat given that you are powered by something very much like the tentacle creep that has infested the city, and can rip people in two, absorb them into yourself and take on their forms, and, naturally, ninja kick helicopters out of mid air.

The campaign is a series of flashbacks as Mercer recounts the events that lead up to an ominous final showdown and during which you grow progressively stronger, but the first level introduces you to the full range of powers Mercer possesses. you can hit things, run up buildings, hit things harder, and unleash huge blasts of tentacle creep that destroy all enemies over the space of a couple city blocks. These abilities are intensely fun to play around with, and the graphics and targeting system do a good job of keeping gameplay lucid and mostly believable, even in the midst of some of the more chaotic battles. The thing that really bugs me about‚  Mercer’s stock powers, however, is that I’ve seen them before. The Incredible Hulk: Ultimate Destruction for the old-timey Xbox ‚ and PS2 is also from Radical Entertainment, and operates on a very similar (by which I mean pretty much identical) system of breaking things for points, and it’s pretty obvious that the developers didn’t change the power set a whole lot between the two games. Now, a next-gen version of Ultimate Destruction is hardly a bad thing, but the new stuff that Prototype has to offer, the stuff that would make it more worthwhile than last generation game you could get for a fraction of the cost, is just downright uninspiring.

To begin with, Alex Mercer is the most emo superhero ever. Yes, even worse than Spider-Man 3. He walks around with his hoodie up all the time, only ever talks about revenge (with flat, only-for-exposition-purposes voice acting), and when he discovers that he can leap tall buildings in a single bound etc., his first instinct is to make the people responsible sorry, for no particularly well stated reason. He has lost his memory but he trusts his sister and ex-girlfriend unconditionally. He is mad at the evil corporation for infecting the city with the tentacle things, but he’s the one who set the zombie queen loose, and doesn’t seem to care if when he steals a tank it crushes a couple dozen civilians. He’s angry, un-compelling and really just an un-likeable character. And the rest of the narrative doesn’t fare any better, playing out a clichƒ© government conspiracy cover-up type thing that is exactly the same as every disaster movie plot ever. The mood of the game is too dark, and really just takes itself too seriously. It would honestly be more fun if it just dispensed with premise entirely, left a lot of unanswered questions, and just encouraged you to wreck helicopters for no reason. I mean, it’s really what you wind up doing anyway. 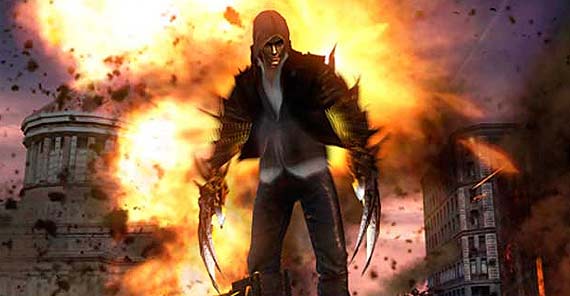 Now, my favorite games of all time are open-world sandbox-style games much like Prototype. Saints Row 2, Mercenaries1&2, anything Spider-Man, and of course GTA hold places of honor on the shelf above my Xbox. The reason is that my attention span is directly proportional to the number of clever jokes, explosions or shiny objects right in front of my face, and open-world environments allow for hours of endless tooling around with no specific goal but plenty of entertaining stuff to come across. Prototype didn’t live up to my expectations on this front, even with all the blowing-things-up there is to do. I am not knocking Prototype’s combat system even a little bit. The powers are sweet, there is never any shortage of bad guys to toss around, and there is there is a powerful satisfaction that comes from your awareness meter dropping to “anonymous” meaning there are no more baddies around because you crushed them all. The problem is that, if you stripped away the combat, there’s nothing interesting left.

Crazy combat is the definitely reason I bought the game in the first place, but the key to a good, engaging sandbox game is to have a rich environment to explore around all the carnage and helicopter-kicking. Sure, GTA IV is singular in its depth and the diversity of its NPCs and I certainly don’t expect every game to even come close to offering that level of variety, but they could at least try. In Ultimate Spider-Man, Spidey would crack jokes and race through Queens with the Human Torch. In Saints Row 2 there were more inside jokes than I could count, and the dialogue and premises for the missions were often laugh out loud funny. (Like stealing hos from one pimp to help another pimp. Hysterical.) The best Prototype has to offer is a dark, brooding, kind of confusing story about revenge or salvation or “¦.something, and a protagonist that is way too depressed given the crazy powers he has.

Blast Factor: Everybody can agree that if there are three things in the world that are fun to smash into the ground, they are zombies, evil SWAT teams and helicopters. Prototype does a beautiful job of making sure that you get plenty of opportunity to fight all three, usually at the same time. Once you get bored with the novelty of the battle system however, the game offers a moody, clichƒ©d narrative that fails to set it apart from other sandbox games out there.