James Reinhart, one of the founders of an innovative new company, called ThredUp, came to speak with Blast recently. Reinhart and friend Oliver Lubin are on a mission to add a refresh button to your closet.

BLAST: So, James, we hear you’re a Harvard guy, correct?

BLAST: And how did the idea for ThredUp come to mind for you?

JR: I was literally getting dressed last November and doing the classic “going through stuff in my closet,” and there was all kinds of stuff in there in good shape, but I was tired of wearing it. And it occurred to me; lots of people have tons of stuff and feel they have nothing to wear. I asked around and everyone said, “I have the same problem but I just let stuff pile up in my closet.” So I thought, why don’t people transact in the used clothing market place? It was really a sort of “aha” moment at seven in the morning.

BLAST: And the economy hasn’t hindered business at all? It sounds like this is the right time for something like ThredUp.

JR: Yeah and I think this is a time where Americans are trying to economize and cut back on luxury purchases. It’s accepted more; now is a great time for used stuff. You see transactions on every used marketplace and they’ve gone up. People are trying to get more value from stuff they already own. 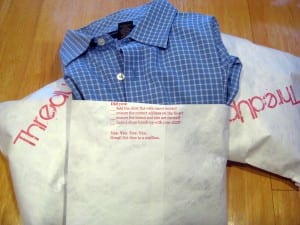 BLAST: How do you think ThredUp is helping the fashion world environmentally?

JR: Well, I think it’s a classic example of trying to do more of a reduce, reuse, recycle mentality. We all have enough stuff in our closets that just aren’t new to us, and if someone else were to use the item they’d be perfectly happy with it. I mean, we haven’t done a carbon footprint analysis”¦ but it’s a lot more environmentally friendly than buying new items from China. I think that matters.

BLAST: And its similar to how Netflix works?

JR: Yes, exactly, and its exactly how Netflix works with the exception that Netflix goes through its warehouse, and we are exactly peer to peer.

BLAST: So its different from consignment because you can constantly recycle and keep clothing from being wasted? Or how would you describe the biggest and best difference?

JR: Yeah, so if you compare it to a place like Second Time Around, the difference is that for most people, its not as easy to get to these consignment shops. The average person on a Saturday doesn’t have time to do vintage shopping. You can do it all online “" sizes you wear, brands you like “" all those types of things. You can do it at midnight on a Wednesday versus going to a vintage store. It’s a real time efficiency issue. And some consignment stores are set up a bit haphazardly, where you’re trying to find the diamonds in the rough. And most of those diamonds in the rough are in other people’s closets. We can help you shop from other people’s closets.

BLAST: Do you think this will effect other industries and how they operate sales, recycling, or renting? After all, movie rentals were impacted by Netflix in a huge way.

JR: I think what you’ll see is that retailers will understand that consumers want more environmentally friendly items, and want to get more value for their goods. This movement to discount and get everything cheap will (be helpful) in the long run. I’m not sure how it will change the entire industry, but you can mix and match between new and used.

BLAST: And your pilot went well?

JR: Yeah, the pilot went great. We had 160 uses in a men’s pilot, and just over several months from February to April with an 85 percent satisfaction rate. Eight out of 10 are major indicators.

BLAST: Are you going then market to men, women, children?

JR: We are relaunching with men’s and women’s and hoping to add kids in about a month later. Kids are a natural fit for us because kids grow out of their stuff so quickly. We’ll be doing the hand me down experience “" quicker, faster, and more efficiently.

BLAST: Anything else you want to say about ThredUp?

JR: I think ThredUp is a real experience product. I think people need to really give us a chance. I noticed in the pilot, a lot of people outside of the 160 signed up but then chose not to use their envelopes. And the people who did really do it liked what they got. And that’s part of the fun. You can get cool stuff delivered to your doorstep based on what you specified. Its not just great value, it has a fun aspect.

ThredUp points out to us: Why can’t it be painless to get rid of stuff you don’t wear anymore, through an easy and cheap process to get new stuff that you will wear?

“So far it has been great and I think the key thing they’ve done since the beginning is using high quality items. The results have been positive for me” Williams said. “If you wanted to, you could use Ebay, but the coordination costs would be so much. They (ThredUp) do it at a price that is much lower than the value it delivers to the customer”.

Right now, the first 1,000 registrants can try ThredUp for free the first three times. You can sign up at Thredup.com and be notified when registration opens.