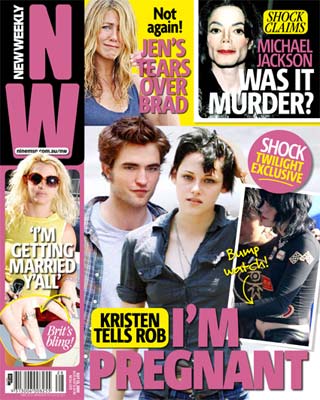 No dammit! They’re not supposed to have sex until the last book! DUH! Like, everyone in the whole “Twilight” world knows that Bella and Edward don’t do the dirty until “Breaking Dawn!”

But if one Australian celebrity tabloid has it right — and we know how spot-on these tabs usually are — not only did Kristen Stewart and Robert Pattinson get it on, but she’s pregnant with his child.

The New York Daily News reported that an “insider” quoted by Australia’s New Weekly said that Stewart was, uh, late, and “she obviously started to thinking that she could be pregnant. And because of the timing, she thinks Rob could be the father.” The tabloid also reported that Stewart had a friend buy her a home pregnancy test.

The magazine also reported that Stewart is getting hate mail from fans because she has an “official” boyfriend named Michael Angarano.

It is important to note that neither Stewart, nor Pattison, nor any of their spokespeople have ever gone on the record, at any time, ever, to say that the two are romantic with each other.

Also, there is no evidence that anything in this story is true. But you can’t get enough, can you?