Bit Boy released in Europe on Friday, so we asked its creators at Bplus to field a few questions from us. We’ve got some detailed info on the upcoming title for you, as well as a sneak peek at their next project for WiiWare. 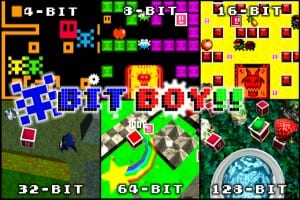 BLAST: To start, why don’t you tell our readers a little about Bplus.

BPLUS: Bplus is an independent games developer based in Vienna in the heart of Europe. As being total Nintendo fans ourselves, we create our games exclusively for Nintendo systems. All of us have a total passion for what we do and we always put much love, work and sleepless nights into our projects.

BLAST: Bit Boy is a very retro title, which has been a popular theme in gaming as of late. Where did you get the inspiration for the game?

BP: Since the announcement of Virtual Console for Wii, we dreamed of retro-style successors of the games we loved so much. When we came up with the idea to do a retro game ourselves, we were suddenly in the difficult situation to decide in which graphical style the game should be realised. We know that every true gamer has a special place in his heart for the style of the games he started with “" and that’s what Bit Boy!! is all about. We wanted the game to spark true retro feelings in all gamers, regardless the age, so we decided to send our one-pixel hero Kubi on a time journey through the whole history of video games.

BLAST: In Bit Boy, your friends have been kidnapped by pixelated creatures from a bygone era. What can the hero Kubi do to save them? Does the game significantly change in gameplay style as well as presentation as you progress through history?

BP: On his journey, Kubi enters the levels of past generations, each of them in the corresponding graphical style. All worlds are full of dangerous monsters that hold Kubi’s friends captive. To rescue your friends, simply touch them and they will return to their own era with a relieved “Thank you!”. While in the 4-bit era only four of your friends need to be saved, there are already 32 of them in each level of the 32-bit generation. Bit Boy!! really is full of variety and every new level offers something new, a fresh and unique theme.

While Kubi is relatively helpless in the 4-bit era, from the 8-bit era on, Kubi can use special attacks to defeat monsters and later in the game he gains the ability to jump onto objects to hide himself from enemies. They change tactics in each level, so be sure to use the limited number of attacks wisely.

We intended that the Bit Generations themselves are not too long because we wanted to give EVERYONE, even new gamers that generally lose interest quickly, the chance to unlock all of them. If you cannot wait to see the next generations, you can really rush through the game, but that way you will never see your name on the top of the high score tables. Finding out the right tactics for a super-duper score can be really tough, you have to survive to collect all the fruit and defeat as many monsters as possible. As a nice reward, the top score of each bit generation is displayed on the title screen, so get your name there!

BLAST: Was there a lot of difference in how you had to approach each bit generation from a development standpoint? Also, did you have a particular favorite that you designed?

BP: Of course we had to create all these different, unique objects in all the various graphical styles, which was an enourmous task for us. On the programming side, one single engine works for all generations, simulating things such as display resolution, color palette, frame rate, controls and enemy behavior. As for favourite generations:

Bernd Geiblinger: I for one prefer the 16-Bit generation, clearly followed by the 64-Bit generation. I just love bright colours and I fell in love with the cuddly style. I am also a big fan of Super Bomberman and that is why the 16-Bit levels are mostly inspired by it and also by Zelda III “" A Link to the Past.

Daniel Bƒ¶sze: My favourite of all the generations is the 4-bit era. Even though I was very young when these games where around, I find it extremely fascinating how fun a game with such simple technology and graphics can be. I also like the 64-bit generation because when I was young, the games of that era had a kind of perfection I didn’t know before. This perfection was mirrored in such simple things as not having to blow into cartridges to play them or the marvelous sound that hasn’t been possible before.

BLAST: This is a little off topic, but we would like to hear about what kind of games all of you like to play when you’re not hard at work on making your own.

BP: To be honest, we didn’t have that much time to play recently because we were snowed under with work. Often, we play our own games when we finally have them at home on our own Wii consoles, mostly to have fun but also to learn what we can do better next time.

Bernd Geiblinger: I really love good platformers and I am totally into multiplayer games of all kinds because I really love to play together with friends in the same room.

Daniel Bƒ¶sze: I like to cook so the game I probably spent most time with is “Personal Trainer: Cooking” 😉 A game that also kept me in front of the screen was Sim City Creator for Wii.

BLAST: Bplus has done a lot of work on the WiiWare service. Do you have any future plans besides Bit Boy that you would be willing to talk about? Have you considered moving into DSiWare development?

BP: Our other Wii Project, Vektor Tank, is coming along pretty nicely; we already have released some juicy in-game screenshots a while ago. We put much work into Vektor Tank and constantly refine gameplay to make sure you’ll have an absolute blast when you get to play it. As for DSiWare, there are some ideas floating around, but nothing tangible right now.

Thanks to the folks at Bplus for taking our questions. You can see more of Bplus work and media at their official website.