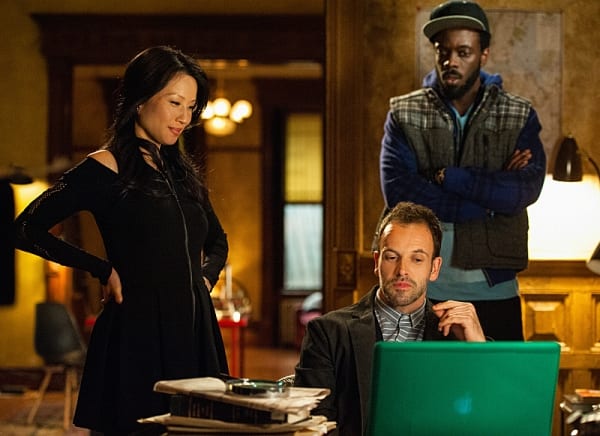 “The woods are lonely,

But I have promises to keep,

And miles to go before I sleep,

And miles to go before I sleep.” – Robert Frost

This is the best episode Elementary has aired since “M,” and fittingly so considering the winding down of the last few episodes-—a straight run until May 16th  —the ultimate lead up to a jam-packed two hour finale.

I’ve been waiting for the change: the moment where the show began to toe itself out of comfortable waters and that they did, albeit minutely. But as Sherlock says this week, the details are still important. So although next week seems to bring the full force and serialization, this week’s episode is an exciting step and a hint as to what’s to come.

It’s wonderful because while the case is interesting and the key players are given moments to shine, it’s the Holmes hour and it’s one of the few times we’ve seen him as a character whose truly vulnerable and incapable of dealing with such a fact. The reason why this Sherlock is so compelling—as I’ve countlessly mentioned—is because it’s a version of the character whose been humbled and as a result is compassionate.

This episode shows those traits off more than any other thus far.

The case is about a rapist who has made a living of attacking young girls, videotaping the attacks and sending the videos to their respective parents as a means of blackmail.

I must commend the show for choosing not to show any of the actual sexual assaults as many shows would take it as a prime opportune moment for shock value.

Ato Essandoh is back as Alfredo, Sherlock’s sponsor, for two reasons. One, its Sherlock’s one year sobriety anniversary soon and two, he has an old sponsor with need of assistance.

So Sherlock and Joan go and meet with the man where they learn of the heinous crimes being committed against him and his family and tell him they’ll help get rid of the problem for good.

They end up at the number one suspect’s house and when Sherlock goes in for a good ol’fashioned sleuthing session, ends up witnessing the murder of the suspected rapist.

Shocked and conflicted he goes to Captain Gregson for advice. He can, hypothetically of course, report a murder he’s witnessed and potentially threaten the victims’ families with the potential fail safe release of the black mailer’s victims or he can not report it for a few days and spare the families even more grief all the while finding out who did it.

Gregson tells him to hold off on reporting.

That night Watson finds Sherlock with a bunch of sobriety pins wondering what all the fuss is about. She believes this is a way for Sherlock to hint at a needed conversation but Sherlock denies it.

But more on that later.

This episode sends Watson and Sherlock into a frenzied search for not just the killer but also the suspected accomplice who was put in as a means to upload the videos if anything should ever happen. This leads them all over the city where they find many a disparaging act but are soon called in to find out that the body of the attacker has been found and one of the rape-victims’ fathers is in custody for having found the body.

They investigate him and he tells them how he found the body, how he kicked in the face of the man who abused his daughter, and the police believe this is enough evidence to hold him as a potential suspect.

Sherlock is livid at the stupidity the father has shown, believing that he’s put his daughter as well as the others in danger.

Sherlock arrives home where Alfredo and Joan wait for more news. Before he leaves Alfredo reminds Sherlock that the next day they’ll be celebrating his one year anniversary of sobriety and Sherlock tells him that he cannot go. He doesn’t see it as day for celebration because for him it’s a reminder of failure and of the self-destructive path he found it on. Alfredo thinks it’s him being selfish and says that while it might be uncomfortable for him it’s encouraging to others at the meetings who see that it can be done.

The next day they find the attacker’s partner dead in a bath tub in an eerily staged scene that reminded me of Seven in set design and in means of murder. This episode is a prime example of how wonderfully the sets are in this show, always casting the right atmosphere for every investigative scene.

It means that Sherlock is more than a little coiled tight during this investigation where seemingly nothing is going his way.

Joan finds Sherlock sitting in front of the fireplace dwelling on the day’s events and tells him that she’ll look over the files again with fresh eyes, but before she goes to bed he stops her. He tells her that she was right, those chips were in fact a means of reaching out, a way to start a conversation without having to pointedly ask for one. It’s a way for a vulnerable Holmes to seek comfort in a fashion unbeknownst to him.

So she sits and she listens. I won’t lie; I went back and watched this scene again.

Jonny Lee Miller is phenomenal this week. I’ve sung his praises and he continues to impress. While always reliable, always engaging, he isn’t always graced with the breadth of range of emotions other dramatic actors in the television field are due to the stoic and neurotic nature of his character. However when allowed to explore inner emotions he can be explosive (see “M.” and “A Giant Gun, Filled with Drugs”). None more so than this week in a much quieter, moving scene where he confesses a hidden burden to Watson.

He doesn’t want to celebrate his one year sobriety pin not because of what he told Alfredo, but because it isn’t his true one year anniversary. The day after he admitted himself into rehab after realizing that his father was right and he needed to right himself, he got sick, fell to withdrawal symptoms and snuck out to find a means to get high and did.

And that, was the last day he ever did drugs.

Joan tries to comfort him by saying that the one day doesn’t negate the other 364 of progress but Sherlock can’t agree with that sentiment.

“I decided to stop using drugs, yes? I decided. Me. And then, twenty-four hours later…Sounds like a mere detail…But I’m a man of details and it matters to me.”

It’s a poignant and moving scene. As prideful as this character is he can hardly manage to spit the words of failure (in his eyes) out, trying to confide and seek comfort in Watson all the while desperately trying to keep the well-structured barriers up. It’s a struggle for him, but he tells Watson after choking the desperation down that he is going to tell Alfredo, but it would’ve felt wrong to tell him without telling her first.

This moment is, sadly, broken up by news of an autopsy for the rapist and that’s when the pieces begin to fall. They notice the bruising and disfigurement on the man’s face and realize that rather than a showcase of anger, it was the father’s way of covering up condemning evidence.

They go to Gregson and the victim’s father and tell him they know. That while he had initially gone to seek revenge on the man he had instead stuck a deal so that the blackmail money would now be split, making him the next partner.

It’s a quick and easy cleanup of the case but in this episode they at least had clues leading in that direction for a large portion of the episode.

The episode ends with a brief moment of Sherlock about to tell Alfredo the truth but it quickly returns back to Joan and Sherlock’s apartment where she gives him a gift for his one year anniversary of sobriety.

She tells him it wasn’t expensive, it’s a little dark and not for everyone, but suited him. She wanted him to have it so that he knows that someone is thinking of him.

She leaves the room and cautiously he opens it and it’s a smart directorial and narrative move to not immediately show what the sign says and just let the camera take in his reaction.

This would seem sparse if Miller wasn’t so precise with the subtleties of facial acting.

The camera swoops around to read the quote and it’s by Robert Frost, the one quoted above and how absurdly fitting? It likens itself to his battle with addiction (a battle so tactfully shown), it’s his battle with his own detail oriented psyche, and it’s a look at the possible dark days ahead. But rather than being completely and utterly morbid for such a happy milestone, it also promises hope and perseverance and the need to accomplish something before turning back.

Sherlock Holmes and Robert Frost mentioned in the same episode? Consider me a happy viewer.

I urge television aficionados, Sherlock Holmes addicts, and those who have a spare hour, to watch this show. It isn’t too late even though the season’s sadly drawing to a close. I was never a fan of criminal procedurals—I still am not and you won’t find me picking up the remote to watch Criminal Minds any time soon—but there’s a spark about this show that’s interesting to watch. It had a shaky beginning but somewhere around the middle (around the still best episode to date “M.”) it found its footing and began presenting consistently good episodes week after week. I haven’t felt this excited about a new series in a long time. Glee crashed and burned, I knew I was going to obsess over Game of Thrones due to previously reading the books, and The Newsroom never really captured my interest like it did in the series premiere. So while Elementary doesn’t necessarily touch the technical quality of some other new shows this season, nor is it the best, it undoubtedly makes up for it with its warmth and charm.