Look for the name Don S. Davis in the credits of television shows and movies, in the corners of oil paintings, on a military badge and, soon, on a screenplay cover. He is a man of many roles, many talents and, appropriately, many fans.

People often don’t see the person behind the TV character or movie hero, but behind Davis — who has 134 acting credits according to IMDB.com — there lies a warrior, educator, painter and writer.

Davis has played many roles over the years, but he has been an artist his entire life.

Davis’ art portfolio is a combination of oil paintings, drawings, wood carvings and stage designs, all of which exhibit attention to detail and affection for the simplicity of the country life he grew up in. Originally from Aurora, Mo., Davis now resides in British Columbia, but he says the inspiration for his artwork is rooted in his rural hometown in the Ozark Mountains.

“It’s a small town filled with good people in a beautiful area,” Davis says. “It’s a beautiful area with picturesque towns and farms set among rolling hills, which are crisscrossed by many rivers,” he writes in his biography on his art website, donsdavisart.com. “The towns and farmsteads contain wonderful old homes, barns and other buildings that provide nearly limitless opportunities for artistic inspiration.”

Though the picturesque towns inspire his work now, Davis says that in college he was greatly inspired by abstract painters, including Robert Motherwell and Jackson Pollack, who are still among his favorite artists. “I like abstract art. I still do a bit of it,” he says. “But spending 16 years teaching stage design and technical theater seemed to change my personal creative orientation toward more representational work.” 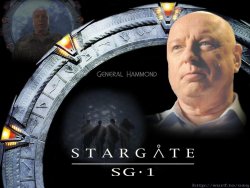 Perhaps most well-known for his roles as Major General George S. Hammond on the Sci-Fi Channel television series “Stargate SG-1” and Major Garland Briggs on “Twin Peaks,” spaceships and eerie towns are not the only settings Davis performs well in. Before picking up acting in the late 1980s, he taught at the college level, served in the military and completed a master’s degree and doctorate in theater.

Davis’ hometown in the Ozark Mountains inspired much of his artwork, but the powerful, authoritative characters the 65-year-old actor plays best came from his years in the military during the mid-1960s, when he was stationed in Korea. He entered the US Army with the rank of lieutenant and left as a captain with a collection of memories to fuel his acting career.

“I draw on my experiences in the military and the unique people I met and worked with in a lot of my work as an actor,” Davis said.

Now that “Stargate SG-1” is no longer in production after 10 seasons, the general has retired his Stargate Command badge and picked up his paintbrush. Painting will not become a new career for Davis, who says he does not sell his work — yet.

“Over the years I’ve often thought of opening an art gallery — I still think about it,” Davis said. He is entertaining the idea of marketing select prints of his paintings if he can find an arrangement that suits him well.

For now, painting is just a way to relax and forget about the aliens left thwarted in his path.

“I paint for myself and my family and my friends,” he says.

The Missouri native has come a long way from his childhood landscape sketches, on a journey that’s taken him to the far corners of the galaxy and back again. It was not until after the army, his own education and the subsequent years of teaching that he decided to pursue acting full time.

Davis may not be a space captain in real life, but he is a true science fiction fan. His favorite sci-fi shows are “Dr. Who,” “The Hitchhiker’s Guide to the Galaxy” and “Lexx.” He is also a fan of Spider Robinson, the Nebula award-winning author of “The Callahan’s Series,” the Stardance trilogy, the Deathkiller trilogy, and other science-fiction novels.

Since starting out, Davis has appeared in numerous films and TV shows. He was the coach of the Racine Belles in “A League of their Own” and had roles in “Alaska,” “Best of Show,” “The West Wing,” and “The X-Files.”

“Carstairs is a ‘tough-guy’ private eye. He’s a slob, and not the brightest bulb in the pack,” Davis said. The show, also starring Shannon Tweed and David Elliot, is about a couple who run an under-funded charter airline service. “When Carstairs is not repossessing their office furniture and equipment, he is often being hired by them to do bodyguard work,” he said.

Davis is currently involved in a number of projects, portraying starkly different roles in each. Set to release later this year are “Woodshop,” an indie comedy about making it through high school alive, “Viper,” a made for television horror flick and “Far Cry,” an action-drama.

“I am a character actor, and I enjoy playing a variety of roles,” he said.

Davis is also appearing in the straight-to-DVD Stargate movie, “Stargate: Continuum,” which will serve as a mid-summer fix for SG-1 addicts. Davis says he is working on his own screenplay, though he is keeping the details to himself for now.

His characters — past and upcoming — differ greatly but share one common gene that draws Davis to them. He is a sucker for “any well-written role that allows me to portray an interesting character in a good story, with a talented director and talented actors, who happen to also be nice people.”

“I’ve been fortunate to have this experience many, many times while working in both TV and film,” most notably, with “Stargate” and “Twin Peaks,” Davis said.

Charlotte Stewart is one of those talented actors and nice people. Stewart, who played Davis’ Catholic wife on “Twin Peaks,” has fond memories of the show and her fictional husband.

“I think Don got a great kick out of being in Twin Peaks,” said Stewart in a recent interview. When the show aired, she says, “he was like a kid enjoying a private party.”

“(He is) one of the most genuine, sweet human beings I have ever met,” she said.

The fans seem to have taken an equal shine to Davis.

“Mr. Davis will always be one of my very favorite people because he cares so much for Stargate and for the fans,” said Patricia Stewart, a fan from British Columbia who met Davis at a convention last August. “And when I saw him later that day, he remembered my name! He’s a real gentleman.”

Taylor has been a Stargate fan for years, but she became a true Don S. Davis fan in 2004 at a convention where he spent time talking to her group and encouraged them to approach for pictures or a handshake throughout the event.

“You could have knocked our table over with a feather,” said Taylor. “Nobody does that at a convention.”

Like many Stargate fans, Taylor kept up to date with the actors’ post-gate lives, careers and interests, which included keeping tabs on Davis’ growing collection of original artwork. After inquiring about purchasing a print, a copy of Davis’ “Oregon Coast” arrived at her door, as a token of his appreciation of her Stargate tribute website, selmak.org.

The painting of a rocky coastline reminds of the coast of Maine, where she often visited with her father. The print has become a priceless possession and represents the growing appreciation among fans for the complexity of the man behind the role. It is a strong appreciation that binds people beyond a television show or movie set.

“If my house was burning, I’d grab my purse, my dog, cat, undies, and it,” Taylor said.