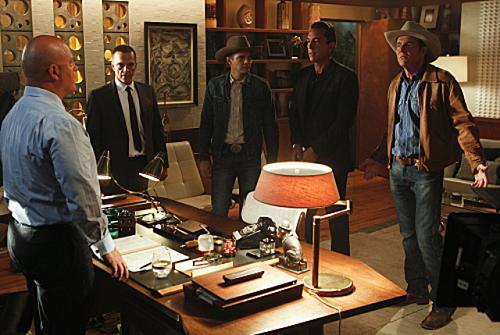 Ralph brings Savino’s inside-man back to him, after he tried to kill Bob Perrin in prison.

“Money Plays” was another decent outing for Dennis Quaid’s new show “Vegas,” which pits the latest cowboy sheriff against the new mobster in town (Michael Chiklis). Thankfully, a good amount of this episode was spent building on the characters and politics established in the series premiere last week.  Though Bob Perrin was found to be Samantha Meade’s killer in the pilot, his story didn’t end there.  Now that Perrin is incarcerated, Savino is worried that he’ll cut a deal with the police and give them information about the mob. While the Perrin situation works itself out, Ralph and the gang work to find a new killer who left a high-roller dead and his girl locked up in the trunk of the car in his garage.  A large part of “Money Plays” revolves around the new case, but in a refreshing way the main players are woven into the case intermittently and the “badges vs. bad-guys” theme is still satisfyingly addressed.

As a new day begins in 1960’s Las Vegas, Vincent Savino and Ralph Lamb are still adjusting to their new positions in town. Savino heads to the counting room and makes a point of clearing out any personnel that can somehow be linked to Bob Perrin. When the manager of the casino ends up being one of those men, Savino tells Red (his go-to goon) that Chicago will send a replacement that they can trust.  Meanwhile, Ralph Lamb is cleaning up the streets by single-handedly apprehending a thief with nothing more than a broom handle. After arresting the criminal, Ralph gets a new case: a high roller from one of the casinos was tied up and shot in his own house.

What follows is your standard whodunit. Ralph and his team follow the leads and continue to question new people who they think are the killers. Though each person they track down turns out to be innocent, they also provide a new piece of the puzzle, which leads the sheriff to the next suspect. Eventually Lamb has an epiphany about the knots in the rope used to tie the victim’s hands together, and that helps him finally catch the murderer.  The guy turns out to be a jealous ex-boyfriend of the girl who was seeing the deceased high roller.  Without a doubt, this episodic crime case was nothing new to the procedural genre.

Still, “Vegas” deserves credit for shaking the standard practice up a bit by incorporating elements of the current case into the overall plot that was established in the first episode. For example, Lamb’s suspects will often lead him into Savino’s casino, which gives us a chance to see the two of them clash. Even when Ralph isn’t inside the casino, his cases often involve a number of Savino’s mob cronies in some way—if they aren’t suspects, then they probably know some valuable information that will help him solve the murder.  When Bob Perrin heads to jail, his prosecution involves the ADA O’Connell and the crooked DA who Savino has wrapped around his finger.  So even though “Vegas” is in many ways just another crime drama, it also finds ways to bring to life to that over-saturated television genre.

What’s more interesting than the weekly murder mysteries is what’s going on behind the scenes as Ralph Lamb and Vincent Savino each adjust to their new places in Las Vegas and in the process, often end up in one another’s crosshairs. In “Money Plays,” Savino has to deal with a difficult new casino manager while trying to clean up the Bob Perrin disaster. It turns out that the replacement manager from Chicago is a girl he knew when she was just a kid, and now she’s pushing to run the casino her way. Meanwhile, Ralph Lamb discovers that his predecessor was being paid off by the mob and simultaneously must struggle to keep Perrin alive long enough to pass the mob’s secrets along to the feds.  These multi-episodic plots are what make “Vegas” stand apart from the rest.  If you don’t care about the particular case that Ralph is working, at least you can get into what’s happening outside of it.

To call the Bob Perrin issue a chess match between Lamb and Savino would be giving Lamb far too much credit.  Savino is running the game here, and even though Lamb manages to fend off his advances momentarily, it’s ultimately Savino who wins the day. Clearly Ralph is new to the whole sheriff business, because he stupidly thinks that Perrin is safe from the mob as long as he is behind bars. Savino tries to use the DA to throw the case, but the DA insists that it’s too much of a slam-dunk case and that even if Perrin is given the death penalty, there will still be plenty of time for him to talk before his scheduled execution. Vinny’s next move is a clever one, staging a minor car accident that gets one of his men inside the prison and that much closer to shutting Perrin up for good. But Lamb catches a lucky break when Dixon walks in just as Savino’s hitman is about to stab Perrin to death.

After the close call, Ralph finally realizes that it would be best to move Perrin to a secure location. He brings Savino’s thug back to him and makes it clear that he’s onto him and will be keeping closer tabs on Perrin from now on. Savino realizes that he’s going to have to get his own hands dirty, so he takes a sledgehammer to a fire hydrant and takes off.  Later that day, the cleanup of the fire-hydrant flooding creates a detour, which leads the car carrying Perrin right into a trap. As the car follows the route that Savino planned for, a parked truck explodes next to it and wipes Perrin out.

Savino already has great potential to become a dynamic villain. He’s a mob boss, so clearly killing people is something that comes with the occupation.  But despite his ability to whack people, Vincent doesn’t always choose that road. In fact, he often uses his wit to solve a situation peacefully rather than busting down somebody’s door and filling them with bullets. When he needed to get rid of an important witness for the prosecution in Bob Perrin’s murder trial, it seemed obvious that the maid would soon be sleeping with the fishes. But rather than kill her, Savino treated the maid and her entire family to a vacation in Florida, which got her out of Las Vegas without spilling a drop of blood.  Likewise, he showed mercy to his employees that were involved with Perrin by letting them leave the casino for good, with no questions asked. For now, it seems that Vincent Savino would rather use violence as a last resort, and it’s refreshing to see a mob boss who prefers brains over brawn.

After two episodes, it’s too early to tell what “Vegas” can or will be.  It’s disappointing that the show seems to be heading in a crime-a-week direction rather than striving to be a major-network translation of shows like “Boardwalk Empire.”  Still, there’s enough going on between the Savino-led mob and Lamb’s cop squad to keep viewers interested in something besides the latest murder case. “Money Plays” was an acceptable follow-up to last week’s premiere, and laid the foundations for what could gradually become a half-way decent TV show. Only time will tell for “Vegas,” but for now it’s still worth watching to see how the show will turn out.