Crash Bandicoot 4: It’s About Time brings Sony’s old PlayStation mascot back into the mainstream 22 years since his last true installment graced consoles. A lot has changed in that time, and while Naughty Dog may not have the reigns this time around, it’s clear that a lot of love went into making this a true sequel that will make any old-school fan proud. Add in some new gameplay elements and a backdrop of challenging new worlds to master and you have a game that anyone can dive into.

Picking up right where Warped left off, It’s About Time sees Crash and Coco on a quest to stop Neo Cortex and N. Tropy from creating dimensional tears in time and space to rule the world. This new adventure brings back the classic platforming the series is known for and levels that swap between 2D linear routes to 3D environments dotted with enemies to defeat and boxes to break. The object of each level is to make it to the end, but you also want to find and break every box you encounter as this unlocks gems that open up secret paths and reward you with new costumes for both characters. There’s a lot of replayability here that will keep you busy for hours. 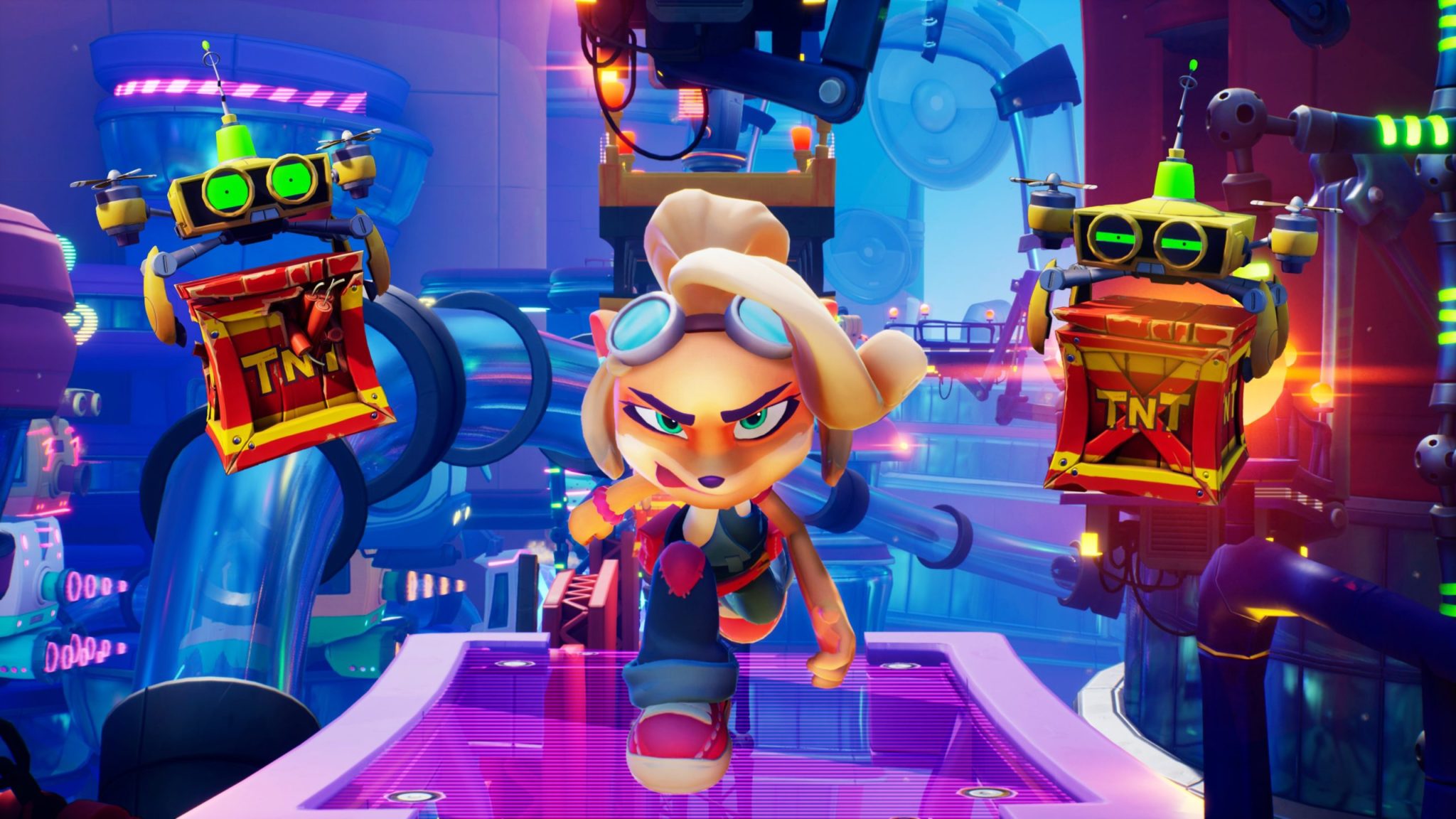 New to the series is the inclusion of Quantum Masks that give Crash and Coco new abilities that are incorporated in some levels. There is a mask that shifts items in and out of the current dimension, one that slows down time, a mask that allows you to perform an infinite spin attack, and one that flips gravity. Each ability requires some quick thinking, and mastering them is the only way to clear certain areas. Try grinding down some rails shifting obstacles back and forth while also trying to not miss every box you encounter. It’s a lot harder than it looks, and while you don’t need to perfect every level, you do get rewarded for doing so.

Each level is part of a themed dimension that comes with its own cast of enemies and colorful settings. Worlds like a New Orleans bayou and a futuristic metropolis will charm you with their attention to detail and imaginative designs. Add to that the different abilities you get from the masks, and you get some fun and varied worlds to explore. It’s a shame, however, that masks act like section-specific items so they’re not always available to use and are not always featured. This leads to some areas feeling a bit stale when you compare them to the near-death experience you just went through controlling time, for example.

The true changes in gameplay come in the form of engaging boss battles and levels that let you play as other series characters. Without spoiling too much, these characters come with their own moves and control styles, so while you’re still breaking boxes and beating down baddies, their levels feel refreshingly differently. Not only that, but you’re also playing the level from that character’s perspective which offers you new twists in the story that dovetail Crash and Coco’s efforts to save the world. Boss battles come more sparingly, but each one feels distinctively different and are a blast to play.

There’s no question you’ll die a lot as the game is challenging–and at times unforgiving–when it comes to how precise it asks you to be when jumping and landing on various platforms. In fact, most of your deaths will probably involve quick reflexes or by missing a box jump and falling to your doom. Luckily, the game lets you play in Retro or Modern mode—the latter giving you unlimited continues and additional check-points if it realizes you’re failing too much. Practice makes perfect here, and if your goal is to unlock everything, you definitely have your work cut out for you. 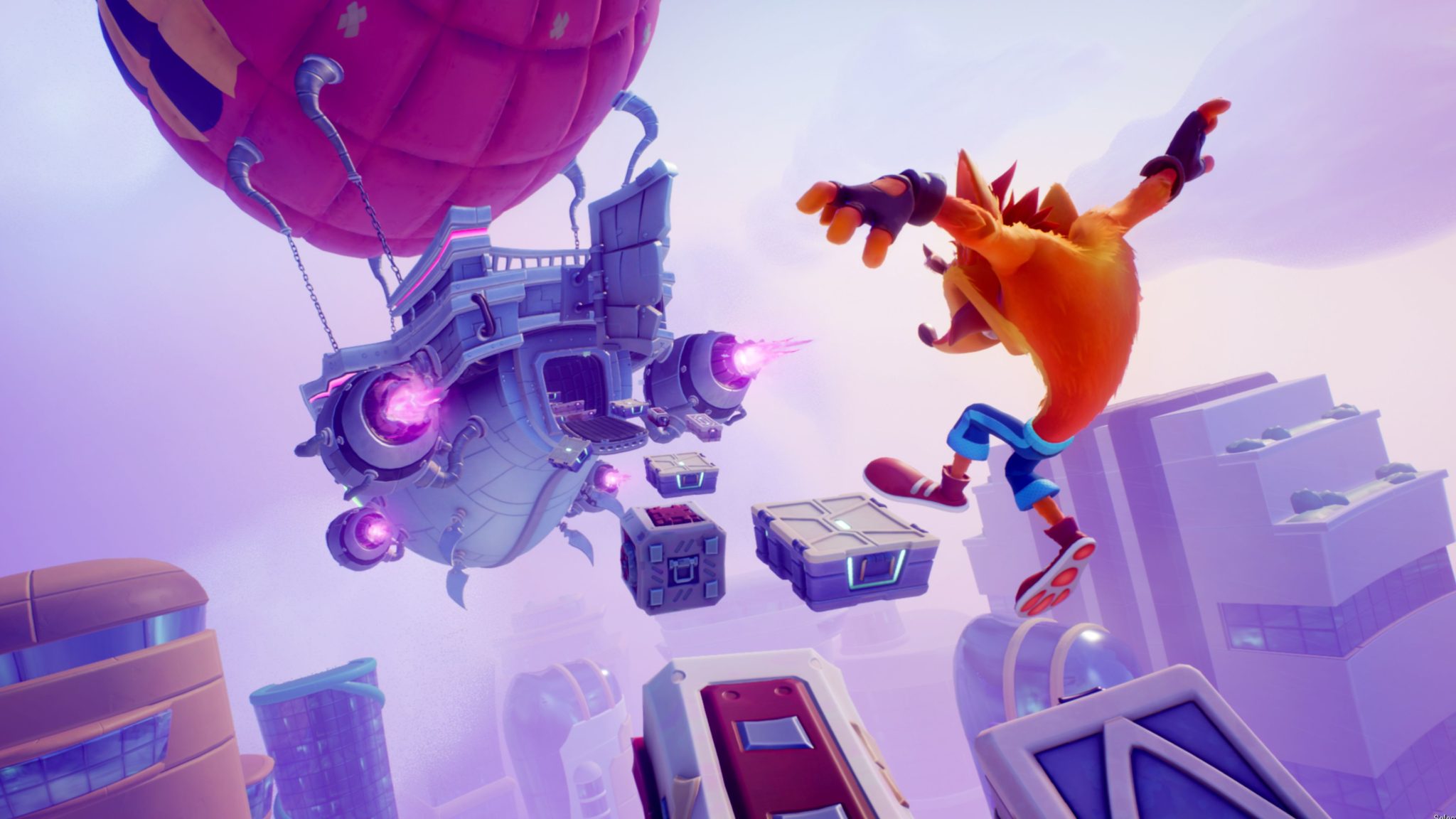 With over 40 levels to perfect and plenty of collectibles to get, this sequel is bursting with content. Time Trials, for example, is another test of your platforming skills and anyone that gets all three medals here has something to brag about. Each level also has an “N. Verted” mode meaning you can play each world flipped horizontally and with a new color scheme. You can also share the madness with a buddy in couch multiplayer modes. Four players can take turns passing the controller at each level’s checkpoint. And if you’d rather play against your friends, you can also take turns for the best combo scores or times.

There’s a lot to love about It’s About Time, and it’s safe to say the wait was definitely worth it. Fans new and old will enjoy the familiar platforming at every turn and those who have never played a Crash game before are bound to realize what the hype was all about two decades ago and still get a game that feels fresh and looks amazing. The game’s difficulty at times may turn off certain players, but it makes up for it with its unique charm and bevy of challenges. Ultimately, this is the Crash sequel we’ve been waiting for.

Crash Bandicoot 4: It’s About Time is now available for PlayStation 4 and Xbox One. A review code was provided by the publisher for the purpose of this review.