At some point in our lives, we’ve all heard a story or two surrounding the legendary King Arthur.

But what we do we really know about the Lady of the Lake, the enchantress responsible for Arthur’s possession of Excalibur?

Zetna Fuentes wants to make sure it’s a lot. Fuentes is the director and producer of the first two episodes of Netflix’s new series, Cursed. Based on the illustrated novel by Frank Miller and Thomas Wheeler, Cursed is a new take on the Arthurian legend, focusing on a teenager named Nimue (played by Katherine Langford) who will eventually became the Lady of the Lake.

Following Cursed’s ten-episode release on Netflix, Zetna Fuentes spoke with Blast Magazine and other members of the press about origin stories, female empowerment, and the challenges and rewards of bringing an illustrated novel to life on such a grand scale.

How did you first become introduced to the world of Cursed?

Zetna Fuentes: Tom Wheeler and Frank Miller created the book series and the TV series and I worked with Tom’s brother, Bill Wheeler, on Ray Donovan. I was sent the script through Bill. He told me that his brother had written this script and asked if I wanted to take a look at it. I told him to send it to me and once I read through it, I really wanted to do it and I fought to get the job. 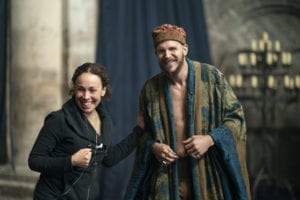 One of the interesting things about this show is that it tells a story that is supposed to have taken place so long ago but yet it has so many relatable themes to our world today, like judgment and persecution of the “other”. Was that something you were conscious of making clear when working on Cursed?

Fuentes: Those themes were in there from the very first script I read and in the book. For me, thematically, when stories have something else to say, it has much more meaning. I want to be entertained and we all want to watch something and be compelled to watch more but when I find something to be layered with more meaning, it just creates a deeper world. With Cursed, that was definitely in there. The concept of persecution of a kind of people just because of who they are, whether it’s the color of their skin, their sexual orientation, or something else, that was really meaningful to me. We are all familiar with the concept of constant oppression of a people just because they are different. I also thought the nature element and the theme of what is happening to our natural world was really interesting and I wanted to make sure that was in there. Hopefully it doesn’t hit you over the head but in the organic storytelling, hopefully it feels like it is part of the world we are putting out there. 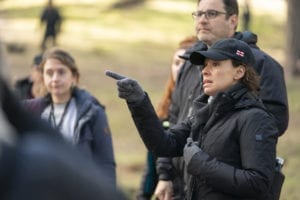 Cursed was based on an illustrated novel that was still in the process of being completed when you began work on the show. Was there a lot of collaboration between Frank Miller, Thomas Wheeler, and yourself when deciding how to transition this world from page to screen?

Fuentes: The book was far along in terms of the process it was enduring but in terms of the collaboration between Tom, Frank, and us as we started to move along with the show, it was interesting. It was so fun to throw ideas out. Frank was still working on his illustrations and he wanted to see what we were doing and what the vision of the practical worlds we were building looked like and we wanted to see his illustrations. We were really able to bounce ideas off each other. It was an amazing, creative conversation that happened that was really fun.

From just the pilot episode, it is clear that this show tells a story on a very grand scale. What was it like embarking on such an intense endeavor?

Fuentes: It’s a lot of work and a lot of preparation and I love it. I’m so humbled and so grateful. It is not lost on me that I get to tell stories for a living. With a show like Cursed, it involves a lot of moving parts. The more people and more elements you have to account for, the more you have to make sure you are dotting your i’s and crossing your t’s because you want to make sure that everyone is safe. When you have battle sequences with horses on sand, smoke, practical fire, weapons, and stunts, you have to do a lot of planning. If you want it to look messy and organic, which is what we wanted, it needs to be planned to look messy. It took a lot of effort and lots of people to pull this together – everyone from department heads to artists to the crew in each of those departments.

Cursed tells us the Lady of the Lake’s origin story. If you had the opportunity, what other character’s origin story would you like to tell?

Fuentes: I love an origin story or a coming of age story. Maybe now because of all the characters we’ve created, it would be fun to do a take on one of them. I’d love to go back and dig into Pym’s background or Squirrel’s background. Really, I’ll take any of our characters.

Watch all 10 episodes of Cursed on Netflix today!