“Oh, brilliant!” – the first words uttered by the Thirteenth Doctor at the end of last year’s Doctor Who Christmas special. These are also the perfect words to describe the unprecedented and exciting decision to cast Jodie Whittaker as the new Doctor, thereby making her the first female to ever play the role in the show’s 50-year history.

To celebrate this incredible moment in science-fiction media, cast members Jodie Whittaker [The Doctor], Tosin Cole [Ryan], and Mandip Gill [Yasmin], along with showrunner Chris Chibnall and executive producer Matt Strevens, flew to San Diego Comic Con to speak to thousands of dedicated Whovians in a packed Hall H panel. Prior to this event, the group met with an audience of press to discuss the mysterious upcoming season.

Since its inception, Doctor Who has gained a cult-like following with millions of devoted viewers. Taking on the role of the Doctor would be a nerve-wracking experience for anyone, but especially for the first woman to ever accept the title. However, Jodie Whittaker seemed confident in her ability to play the part, regardless of her predecessors’ genders.

“I think actually being the first woman to play the Doctor is incredibly liberating because with this role, the rules are out the window. The most wonderful thing is that you regenerate so you can bring everything you and everything previous and make it your own. Casting a woman doesn’t change that…It’s interesting because I’ve never approached a role thinking about how a woman would play it because I just am one. I don’t know if a guy has ever wondered how a man would do a scene. You just are and it’s your POV. Essentially, my energy and approach to this is coming from a very instinctive place which feels genderless.”

Another notable change in the upcoming season is the shift in title from companions to friends. Chris Chibnall, the showrunner and executive producer, emphasized that it was not a rule for Whovians to follow moving forward but felt like the right choice for now. 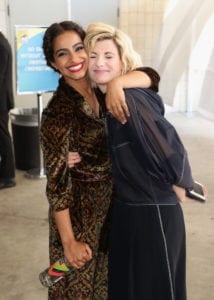 While long-time Whovians may be hoping for a glimpse of old allies or foes, Chibnall stressed that this season is filled with “all new stories, all new monsters, and all new villains.” This was crucial to Chibnall as he wanted to ensure that viewers who were unfamiliar with previous seasons of Doctor Who could join in the show and enjoy themselves as much as those with a detailed knowledge of the show’s history.

“For all Doctor Who fans out there who love the show, I would encourage you to find that friend of yours who has never seen Doctor Who, and get them into your living room for Jodie’s first episode…I hope this season is as inclusive and accessible and mainstream entertaining a version of Doctor Who as we could possibly make. I feel like our goal is to convince people who have never seen it that it is the greatest idea television has ever had.”

This sentiment was echoed by Whittaker, who hopes that her episodes will attract new viewers who were hesitant to turn in previously.

“This is absolutely for the fans, the Whovians, but it’s also for anyone who hasn’t seen the show before. You don’t need any encyclopedic knowledge and history of Doctor Who to be included in this journey. We’ve got 10 standalone episodes that have huge character arcs, but if you came in at episode 4, that has its own adventure.” 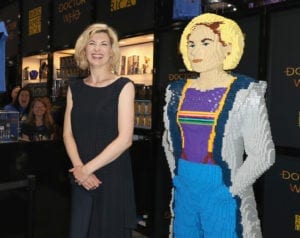 While attracting new viewers is a large focus for Chibnall, he promised that the Whovians would not be left behind and would get “a really concentrated hit of everything they love about Doctor Who.”

Another wonderful and notable shift in this season of Doctor Who is the increased diversity both on-screen and off. Chibnall confirmed that this year marked “the first writers of color to write on Doctor Who” as well as the presence of “two female writers in the guest writers’ slots…and two female directors across the series.” This was a completely logical decision for Chibnall as he expressed that “the whole concept of Doctor Who is that anybody can go anywhere and do anything.” He further emphasized that this show “should be the most inclusive show on television.”

While many are excited about Whittaker’s casting and see it as a progressive step forward, there have been a fair share of naysayers who don’t support Chibnall’s decision. To those dissenters, Whittaker has one message:

“It’s okay to look up to women. That is exciting and not to be feared. This is a show for everyone.”