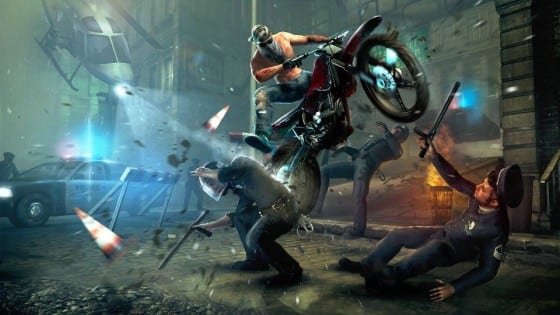 Between rage and serenity.

Developed by: Tate Interactive
Published by: Tate Interactive
Genre: 2D Racing Platformer
Platform: PlayStation 3 (PSN), Vita
What works: When patience and focus come together to conquer the seemingly impossible and climb the leaderboards, the game truly shines.
What doesn’t work: The steep learning curve can be intimidating to some, while the lack of a level editor and few customization options leave the game feeling light on content.
[rating:3/5]

For the past 3 years, Xbox 360 owners have been enjoying the joys of RedLynx’s Trials HD while PlayStation 3 owners have been left standing with their clutch in their hands. Lucky for them however, developer Tate Interactive decided to right this wrong by creating their own 2D motorcycle racing platformer specifically for PS3 owners. Like its XBLA counterpart, Urban Trial Freestyle is essentially a modern Excite Bike in which players negotiate treacherous, over-the-top terrain on a 2D plain.

Appropriately devoid of any narrative, Urban Trial Freestyle consists of five briefly entertaining mini-games and twenty “tracks” in which players perform stunts or complete time trials. Based on their performance in each level, players are rewarded with a star rating. When enough stars are accumulated, more levels are unlocked, thus encouraging players to shave off a few seconds from a time trial or nudge their jump height a bit higher for more stars. Collectible moneybags found spread throughout each level allow players to purchase customizations for their bike and rider. Unfortunately, the majority of these available purchases are strictly cosmetic. In actuality, there are only a few limited items that serve as upgrades, leaving the customization lacking, and players mostly on their own in terms of improving their performance.

Probably not safe to try at home.

As in Trials HD, the learning curve for Urban Trial Freestyle is exceptionally steep, often leaving players facing challenges that initially appear impossible. More patient players, however, will be rewarded after realizing that the game is all about precision, memorization, and learning to take advantage of the environment. The control scheme consists only of accelerate, brake/reverse, and balancing the weight of the rider via left thumbstick.  Also, the triangle button serves to reset players at the most recently passed checkpoint, instantaneously. This avoidance of loading times is an absolute necessity as players will be using this feature–a lot. Simple to learn yet infinitely difficult to master, the precision and finesse required to accurately tweak a rider’s balance at just the right moment  can make, or literally break, a player.

Fortunately, to alleviate the frustration of watching one’s rider eat it repeatedly, the crash animations and ragdoll physics of the rider are brutally hilarious. Unlike the adequately mediocre soundtrack, the look of Urban Trial Freestyle is pleasantly vibrant. While gameplay takes place solely on a 2D plain, every background is dynamic and alive with activity, oftentimes influencing players by way of flying obstacles or collapsing structures, thus creating a satisfying illusion of level depth. 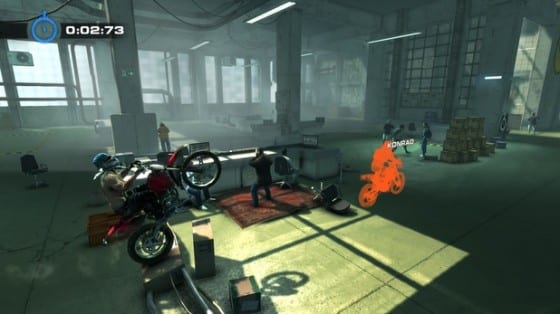 Racing ghosts will keep you up at night.

While Urban Trial Freestyle features no actual multiplayer, players do compete indirectly via leaderboards. Not only does every track and mini-game feature its own leaderboard, but each individual stunt does as well. As players approach each stunt, a billboard is cleverly displayed featuring the name and avatar of the top scorer worldwide or among a player’s friends. When competing in a time trial, players race against the “ghost” of the top scorer. As with most score attack games, therein lies the source of fun (and addiction) of Urban Trial Freestyle. Attempting to increase one’s own score may be entertaining for an hour or so, but attempting to dethrone a friend and reclaim the highest rank on a leaderboard can eat up an entire evening for more obsessive players.

Sadly, the appeal of Urban Trial Freestyle is limited by its lack of depth. Once players have achieved five stars on each track, interest in the game is bound to plateau, especially if they have no one on their friends list with which to compete. Urban Trial Freestyle oddly features no level editor. Tate Interactive’s decision to forgo this option is perplexing as it not only severely curtails the level of potential content, but it was a major feature in Trials HD, which released over three years ago.

Much like its Xbox 360 predecessor, Urban Trial Freestyle walks the line between rage and sweet unmatched satisfaction. If players are able to overcome the intimidation of the steep learning curve, they get to see the game at its very best: when persistence and focus enable players to accomplish the seemingly impossible. However, repeatedly failing the same track literally hundreds of time can be controller-smashingly frustrating. Furthermore, the inclusion of cross-buy or cross-save functionality would have also benefitted that game as its bite size levels are perfectly suited for playing on the go. While score attack perfectionists will undoubtedly love losing hours of sleep climbing the leaderboards, Urban Trial Freestyle ultimately suffers from its lack of content.