The Kingdom Hearts franchise has captivated players for over a decade with its colorful universe that captures the best of the Square Enix and Disney franchises. Kingdom Hearts 3D [Dream Drop Distance] continues its tradition of bringing two worlds together and brings back familiar characters and settings while introducing us to new gameplay mechanics that ultimately make for one of the most impressive titles currently available on the 3DS.

Kingdom Hearts 3D sees the return of best friends Sora and Riku, who must undergo the Mark of Mastery exam to become true Keyblade masters in preparation for the return of the evil Xehanort. The two travel to worlds that were previously plagued by the Heartless but now lay dormant and are disconnected from each other. Their test soon becomes more of a trial as old villains and new monsters that inhabit the sleeping worlds attempt to stop them from unlocking each world’s keyhole awakening them from their slumber. 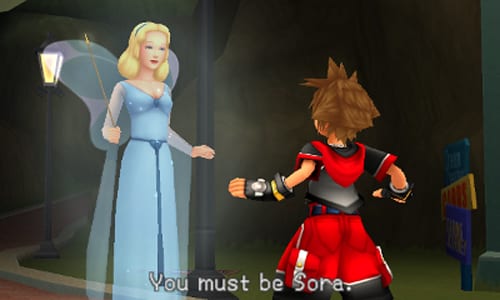 As with past Kingdom Hearts games, each Disney world Sora and Riku travel to gives summarizes the events of the movie it is based on. However, because both friends are traveling to two versions of the same world, each one’s experience will differ and provide two perspectives of one story. In The Hunchback of Notre Dame’s La Cite de Cloches, for example, Riku may give Quasimodo courage to leave the bell tower, but Sora’s world sees the plot reach its culmination at Notre Dame. Both Sora and Riku need to restore each version of their world to progress through the game.

The game’s new Drop system lets players switch between each character and pauses the action in one character’s world while you play as the other. This can be done at any time during gameplay and gives you a brief session with each character until your Drop gauge decreases and forces you to switch back. At first, this may seem like an odd feature to have in a game that is known for drawing players into its narrative. Here I was losing track of what I was doing in Sora’s world having spent the last thirty minutes catching up with Riku’s side of the story. The more time I spent with the game, however, the more I realized the Drop system wasn’t a burden at all, but instead kept each character’s progress fresh in my mind so as to not forget their involvement in the game’s overall plot, which can be confusing until you piece both characters’ parts together. 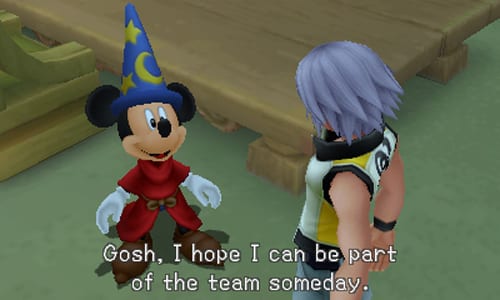 You can, of course, switch back to a character immediately after you are forced to drop, but the game rewards you for sticking with one character for an entire session in the form of boosts you can purchase after each drop. These boosts require Drop Points, which you get for defeating enemies, and can temporarily increase a character’s stats and Drop duration. Unfortunately, one of the biggest downsides to the Drop system is that dropping during a boss battle forces you to start it over from scratch when you return. Ending a battle when I was a few hits away from victory isn’t something I particularly enjoyed.

Combat may seem like simple button-mashing at first but battles increases in difficulty over time and present you with enemies that require some strategy to defeat. The game lets you customize your attack and command decks and equip your characters with the moves, magic, and items you want them to have before entering battle. The game’s new Flowmotion controls also makes movement and combat feel much faster letting you barrage enemies with dazzling off-the-wall combos and explore vertical stages with ease. There will also be times during combat when a Reality Shift opportunity arises that takes the action to the bottom screen in the form of touch-based mini-games that, when successfully completed, further damage your opponents. These mini-games are unique to each world and do a great job of mixing up the action during combat and incorporating the 3DS’s touch-based features without feeling out-of-place.

Even though Sora and Riku will encounter bad Dream Eaters called Nightmares in the sleeping worlds, these enemies will drop items that can be used to create their friendly counterparts called Spirits, who can then fight alongside them. In fact, the game has an entire section a la Nintendogs in your menu devoted to the creation and caring of your new companions. You can pet them, play with them, and take AR pictures of them, further increasing their stats and affinity to you. The Dream Eaters also get experience from battles and gain access to abilities that, in turn, enhance your stats when that particular creature is in your party. More powerful creatures require rare items to make, so players can devote their time collecting and finding these items to capture every Spirit in the game. 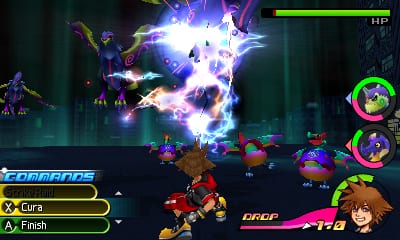 While the game puts a heavy importance on the caring of your pets, Dream Eaters are controlled entirely by the computer and there isn’t an option to decide their combat specialty like you could for Donald and Goofy in past games. Their role is purely to provide supplemental support, but they can also be used in combat to link up with Sora and Riku to unleash special attacks. The game also offers a Spirit training mini-game called Flick Rush that is essentially a series of tournaments pitting your team against another or a friend via wireless. Flick Rush offers fun card-based combat that is a great distraction from the main game and rewards you with medals with which to purchase abilities and items.

Visually, the game is an impressive demonstration of the power of the 3DS. It’s not often that I want to turn up the 3D slider when playing  game, but the frequent cut-scenes and areas in general made me turn it up every time. Each world has its own distinct art style full of little details fans of the Disney movies will appreciate. Some areas, however, – and these are uncommon – feel a bit desolate compared to others. It was also great to see Tetsuya Nomura’s The World Ends With You characters fully rendered and integrated into the game’s story. It’s unexpected, but their inclusion in the game is handled well.

Elevating the game’s quality even further is its wonderful soundtrack composed by veteran Kingdom Hearts composer Yoko Shimomura, whose music gives the game both a sense of innocence and gravity. Even the Disney worlds have fitting scores despite not using any official music from the films. The game’s cast of voice actors is as strong as ever with much of the original cast reprising their roles.

Kingdom Hearts 3D is a testament to the series’ unwavering strength over the past decade that continues to attract fans with its story and gameplay. The game even includes a database that lets newcomers catch up to the series and experience the game without feeling left out. Though the game does have some imperfections, its overall quality far outweighs them all. This is a Kingdom Hearts to fall in love with.

Kingdom Hearts 3D [Dream Drop Distance] is available on the Nintendo 3DS on July 31 for $39.99. A copy of the game was provided by the publisher for this review.