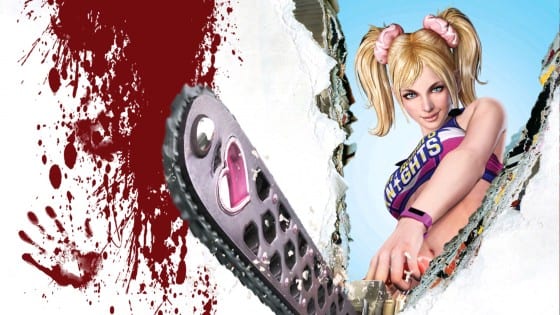 Suda 51 is one of those creators that you can’t quite put a label on. He’s made several criminally under appreciated titles like Killer 7 and No More Heroes, and even created some of the most unique downloadable titles currently available in Diabolical Pitch and Sine Mora. So what would the enigmatic creator do for his next title. Make a zombie game apparently.

Let’s be fair, Lollipop Chainsaw is to zombie games what Hot Fuzz is to action movies; it serves to lampoon the genre, but is also wildly entertaining in its own right. It may not win awards for being the most in-depth game, and it does suffer from a series of questionable design choices that almost make it like the same material it pulls from, but if Lollipop Chainsaw doesn’t make you smile with violent glee, nothing will.

In Lollipop Chainsaw, you play as Juliet Starling, 18-year-old socialite cheerleader with an unhealthy addiction to lollipops. Oh, and she also comes from a long line of heroic zombie killers and carries around a comically big chainsaw to dispatch the walking dead. You’ll spend the majority of your time in the game saving civilians and cutting your way through hordes of the undead.

[rating:3/5]
Developed by: Grasshooper Manufacture
Published by: Warner Bros Games
Genre: Action, beat-em-up
Platform: Xbox 360,PS3
Play it if: You’re looking for a fun game with a sense of humor
Skip it if: The shallow-ish combat turns you off

Don’t worry though, this is a game that realizes how silly its premise is, and uses it to its advantage. The game is quick to dispense the four letter words (even zombies will shout them at you), and the game rewards you visceral kills with sparkles. I’m going to let that soak in. Sparkles. It all works though, as Lollipop comes off as more of a love letter to the genre than a studio desperately trying to jump on the zombie bandwagon, like we’ve seen so many times before.

It all works simply because more often than not, Lollipop is such a fun experience. The game plays like an old school arcade style beat-up-em, complete with power-ups and combos. You’re basically just moving from section to section, clearing out the zombies and moving on, so the game has the tendency to get repetitive quite often, but the game does a decent enough job breaking up each section with a short quicktime event or boss battle, and you’re moving through each scene fast enough that you rarely notice anyways.

This is one of those games that you’re going to get what you put into it. As you progress through the game you’ll unlock new maneuvers and combos to use in your battle, and it’s up to you just how you use them. The combo system adds to the game’s old school vibe and it’s tough to deny just how fun of a button masher this really is.

The game does feature a slew of cool mechanics, like the ability to slice off certain body parts of zombies to slow them down which makes some of the more dragging fights all the more interesting. It also adds a bit of strategy to the game, as zombies who get their legs chopped off can still come crawling after you.

Where Lollipop really stands out is with its remarkably complex and fun boss battles. At the end of each section, you’ll come across one of the “Dark Purveyors,” some of the game’s more powerful zombies, who have been possessed by the spirit of Swan, the goth kid. These battles are often fought in multiple locations and feature some truly inventive enemies. Most memorable perhaps was the punk rock zombie who could turn his words into actual physical objects like the Green Lantern.

Sadly, the game’s main campaign lasts only about five to seven hours and features no multiplayer or new game plus mode. Upping the difficulty does change the location of powerups and several key elements, so it may be worth jumping back in if you really dug your first playthrough, but a lot of others may not find a reason to play it again.

The game also features several curious design choices that will hinder just how much some people truly like it. First, there are a number of unskippable cutscenes in the game, and you’re likely to have to watch them over and over, especially if you die in just the wrong place. This is also hindered by the fact that the save system is remarkably sparse, and you’re likely to have to repeat multiple sections over again, especially on the harder difficulties. T

The Blast Factor: In an era when we seem to take video games far too seriously, Lollipop Chainsaw comes along and forces you to smile and have fun. It’s silly and at times downright stupid, but you can’t deny that it’s a remarkably fun and addictive button masher that never takes itself too seriously. It may not be for everyone, but Lollipop Chainsaw is definitely worth checking out.