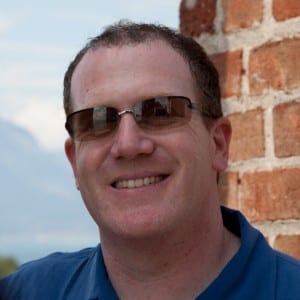 Andy Gavin was 16 when he created a little game company called Naughty Dog with lifelong friend, Jason Rubin. That would lead to the creation of Crash Bandicoot, Jak & Daxter, and a game style we’ve come to appreciate for its use of technology and polish.

No doubt partly attributable to his time at MIT, Gavin’s programming know-how made him a recognizable leader in the gaming industry. Though he has turned his attention to books and hasn’t made a game since 2004, to date, more than 35 million of Andy’s games have been sold to the tune of a cool billion.

We cornered Andy on Twitter recently and he agreed to do an interview for Blast:

BLAST: In your career, you’ve created a bunch of memorable characters — Crash Bandicoot, Jak & Dexter. Where do you get your inspiration for your gaming characters?

BLAST: How did you get your start in the gaming industry?

AG: Jason and I met at age 12. We both loved video games and had some friends in common that swapped (aka pirated) games together. I was a pretty decent programmer and he was a good artist (for 12). Since my games ran well but were ugly and his looked great and crashed, we combined forces. We worked on some games we never published while 13 and 14, including an Apple II version of PunchOut, then when we were 15, sold our first game, Ski Crazed. Naughty Dog was born (although it was named JAM Software until 1986).

BLAST: But you’re a writer at heart right? Writer or gamer? What’s your label?

AG: Serial creative. I was a reader first, and during my entire video game career. I also did a lot of writing in High School and college (but never published anything). Only recently have I been able to devote the time to writing that it really needed. But I would say that my video game career really helped me with it, not so much in the particulars of story or prose craft, but with my general skills at managing and pacing big creative projects. I find that writing uses essentially the same creative muscles as game making.

BLAST: Well speaking of writing, you have a fantasy book that’s out now and, surprise, surprise, another on the way. Tell me about your upcoming title “Untimed” — I hear it’s steampunk. Can never get enough of that.

AG: “Untimed” is a YA time travel novel that chronicles the crazy adventures of a boy no one remembers, who falls through a hole in time and finds himself lost in the past. It’s very different with an extremely immediate first person present voice (in this book the only thing anyone can hold on to is the present). It rocks. Seriously rocks.

Right now (as of early May) it’s out on submission to New York and London publisher’s via my agent, Eddie Schneider of JABberwocky.

BLAST: You also co-founded a little outfit called Naughty Dog. Are you working on any gaming projects right now? What’s percolating? Anything caught in limbo that you want to try to free up here in this interview?

AG: I still love video games, particularly fantasy ones, but I don’t have anything in development. I’m counting the days until the release of Diablo III! I’d love to make a game somewhere between that, Dark Souls, and WoW. But then I think about the 5-7 year project…

BLAST: When you’re not writing or gaming or writing games, what do you do for fun, since this is all obviously WORK, right?

AG: Spending time with my family. Reading (mostly speculative fiction and history). Food and wine. I’m an incurable gourmand. Photography, video games, technology, history, travel, and archeology are a few of my other passions. I’m particularly fascinated by the ancient western world.