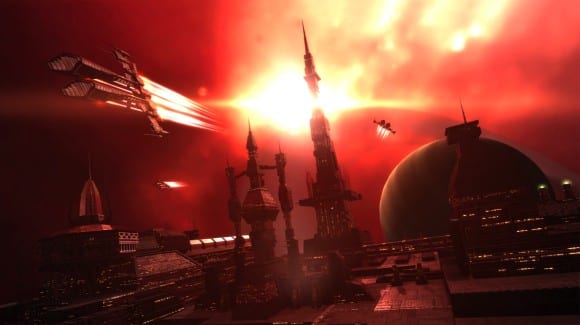 Gamers, what are you doing this weekend? You could download The Walking Dead:Episode 1 (we thought it was good, by the way.) You could organize your 3DS games into folders. And if you’re an EVE Online player, you could spend it waging war against the game’s monetary system.

Eurogamer reports that one of the space MMO’s previously banned players is organizing an attack against EVE Online’s Jita system, the largest trading hub in the game. Led by Alexander “The Mittani” Gianturco’s Goonswarm alliance, a huge fleet of “Thrasher destroyers” have already started attacking.

When asked what he thought about the planned attack, CCP Games just shrugged it off.

“I tell you what, it’s going to be f***ing brilliant,” Jon Lander, senior producer of Eve Online, told Eurogamer this morning. “Absolutely brilliant.”

These types of protests and attacks have happened before, but this one has garnered much attention due to its size.

So if you’re an EVE Online player, you could head to your nearest computer and join in on the fun, or simply sit back and enjoy the action-packed show. By the way, this what the last attack looked like. Behold the action: