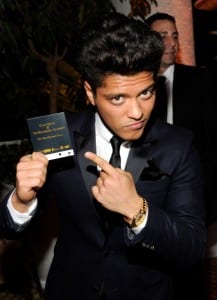 After a stint with cocaine at the Hard Rock Hotel in Las Vegas last year, Bruno Mars has worked the charges off.

After a performance in the Hard Rock Hotel, Mars was arrested in a bathroom for possession of 2.6 grams of cocaine. As punishment, he could have been faced with four years in state prison, but instead was fined $2,000 and given 12 months of probation.

The charges have now been dropped early on account of Mars’ cooperation. Mars’ lawyer presented the case, stating that Mars had completed his community service hours as well as attended drug education classes.

Mars is set to appear in the upcoming Grammys, having been nominated for six awards.