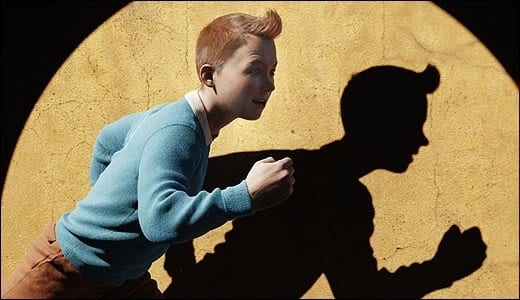 Tagging alongside the massive undertaking by Steven Spielberg and Peter Jackson, “The Adventures of Tintin: The Game” attempts to capitalize on the undeniable hype surrounding the blockbuster film. It may be easy to categorize this game in the same spectrum as the unavoidable horrible movie tie-ins that come with nearly any marketable film. However, by shrinking its audience down to the younger fans of the film, Ubisoft has produced a not so terrible game tie in that may just please some of the more devoted fans of the Belgian journalist.

As is the case with many of these games, the story mimics that of the movie it is based on. There is no deviation from the plot and no interesting spin offs in order to show any further development of the characters. Worse, the game actually expects you to have seen the film before playing it, skipping over some not- so-important plot points in order to get you back in the action. It can feel heavily rushed at times.

Nonetheless, where the story fails to develop past the established base, the gameplay takes in interesting twist on how it captures the events of the film. The bulk of the game places Tintin in a 2D plane where he is able to ascend and descend levels at designated areas in order to avoid enemies. When they do spot you he combat is moronic at best, with the majority of enemies being taken down by a simple shake of the Wiimote. Certain bad guys will be more heavily armored and will require the use of projectile items to defeat them. When everything is working it plays like a simplified Metroid with some Metal Gear Solid elements, yet fails to craft the same level of challenge as those games. Bringing in another partner for co-op only makes the experience easier.

At about half way through the game, vehicles start coming more into play, with extended segments placing you behind the wheel of a biplane, motorcycle, and human torpedo. Unfortunately, the vehicles control like a blind whale with horrible turn angles and unnatural handling. The small joy you feel when the game sends other biplanes at you for some dogfighting action is quickly subdued as you have to fight with the plane you are controlling more than the actual enemy.

There is some rudimentary puzzle solving included as well as small segments where you play as Tintin’s trusty dog, Snowy. While entertaining, they wear thin by the end of the game and fail to add any more replay value to the already short adventure (clocking in at about 4 hours).
Another method of breaking up the action is by means of a flashback sequence in which you play as the Captain of the doomed Unicorn. In it you have a rudimentary, on rails swordfight against some pirates. Here is where some Wii Motion Plus action comes into play as the sword you are holding is highly responsive. It is a shame, then, that you can easily beat most bad guys by shaking it frantically. However, if you are willing to take it seriously, it can be a bit of fun.
In the end, after setting aside all the negative praise, you find yourself with a rather charming little game. It is functional, and the animations are pretty to look at. There seems to have been some genuine effort put behind this project, unlike most movie tie-ins. When it comes down to the grind, this is not worth forty dollars, but any kid who loved the movie will find certain enjoyment out of this title.

Blast Factor: Despite its unavoidable flaws, “The Adventures of Tintin” for the Wii is a functional game. The gameplay is enjoyable and varied and the environments have some charm. It is not made for the average gamer, with the challenge present being minimal for anyone who has played a game in the past ten years. However, it is sure to please any young Tintin fans as they find it wrapped at the foot of the Christmas tree.