Shortly before 4 p.m. today, Suffolk Superior Court Judge Frances McIntyre lifted the temporary restraining order to protecting the Occupy Boston camp at Dewey Square from being raided or cleared out by the city.

In her decision she wrote, “Plaintiffs claim that their occupation of the site and the community they have established thereon are protected by the First Amendment. They seek a preliminary injunction against their removal by the defendants. But the injunction is denied because, while Occupy Boston protesters may be exercising their expressive rights during the protest, they have no privilege under the First Amendment to seize and hold the land on which they sit.” 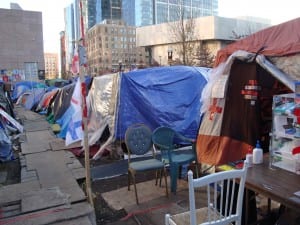 Dot Joyce, spokesperson for Mayor Thomas M. Menino, said, “We are pleased that there is a decision that appears favorable to the city and that gives the city clarity on this issue.”

Sage Radachowsky, an activist well-known around Dewey Square, reacted saying, “I think this is underhanded. I think we can make ourselves safe if given time to do so. I don’t think they are letting us have the conversation with them that we need to have.”

He also said that while he and others were rushing to Dewey Square, children were being removed from camp for their safety in case of a raid by the Boston Police.

Several dozen inhabitants of the Occupy Boston encampment are currently away in Washington, DC to attend the “Take Back The Capitol” march organized by labor unions. When told about the lifting of the injunction in Boston, Kiean Michael Lyons — one of three protestors arrested at the Burger King across from Trinity Church in Copley Plaza on November 5 — commented via Facebook that “A few people from OB in DC are about to be arrested.” At least 20 arrests have been reported today in association with the DC march but it’s unknown if Occupy Boston activists are among them.