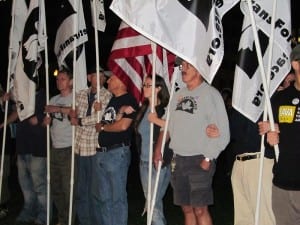 Rachel McNeill is one of 141 people arrested on October 11 when Occupy Boston briefly expand its encampment. This soft-spoken Wisconsin native is a veteran of the Iraq War who joined the Army Reserve shortly after 9/11. She was 17 years old. McNeill spent a year in Iraq, much of it in the so-called “Sunni Triangle,” and drove vehicles along a route that was called “the most dangerous road in the world.”

Now McNeill is a member of Veterans for Peace (Smedley Butler Brigade), Iraq and Afghanistan Veterans of America, and American Women Veterans. McNeill also does work in support of “Operation Recovery: A Campaign to End the Deployment of Traumatized Troops,” a project working to assure service members with Post-Traumatic Stress Disorder (PTSD), Traumatic Brain Injury (TBI), and Military Sexual Trauma (MST) receive immediate support instead of being deployed back into the same situations in which trauma was inflicted. In 2008, McNeill helped organize the “Winter Soldier” event in Madison, WI. That same year she testified before the Senate Democratic Policy Committee regarding “Contractor Misconduct and the Electrocution Deaths of American Soldiers in Iraq.”

McNeill talked to Blast about the occupation, her arrest, and her reaction the injury received by USMC veteran Scott Olsen during police action against Occupy Oakland earlier this week.

BLAST: Rachel, you and Scott Olsen are both members of Veterans for Peace. How did you feel when you saw those graphic pictures of the injuries he sustained in Oakland on October 25?

RACHEL MCNEILL: I was appalled…It’s a very unfortunate situation and should never have happened. It’s really sad to see something like this…But, it’s not the first time. Another veteran who is active in various veteran’s organizations, including Warrior Writers, was seriously injured at Hofstra University outside of a presidential debate when he was trampled by a police horse. Nick Morgan’s injuries required reconstructive surgery. The most recent event has received considerable coverage, though the incident at Hofstra University went largely unnoticed by the mainstream media.

BLAST: Jean Quan, Mayor of Oakland, just announced they won’t be trying to remove Occupy Oakland again anytime soon. Is this a minor victory for the movement?

RM: I’m not sure this is something to be discussed in terms of victory. Jean Quan approved of clearing the protests. But what that would actually look like in practice…maybe that wasn’t a consideration. Now that it has played out and led to the serious injury of a veteran and the injury of other peaceful protesters, Jean Quan has had a change of heart in light of the unfortunate actions by police in carrying out an action which she approved without meaningful consideration of the consequences.

BLAST: You mentioned “Warrior Writers,” the project that brings together veterans and current service members to express themselves through artistic media. What’s your involvement with that?

RM: I am part of the Steering Committee, which was recently formed to help guide and develop the organization as programming and participation increases. I’m part of the editorial collective and am the layout/type designer for the third anthology…someone I am working with on the next Warrior Writers anthology lives near the hospital [Scott Olsen is in] and she is busy dealing with and providing space for media and other veterans to congregate. One of the members of our editorial collective is fairly involved, so we are being flexible with that as we continue working hard to release the next anthology of veterans writing out.

BLAST: Veterans for Peace is a very visible presence within Occupy Boston. What led you to become a member of an anti-war group.

Veterans For Peace describe the 10/11/2011 Police Raid on #OccupyBoston from Closed Loop-Films on Vimeo.

RM: This is not an “anti-war” group. It is a peace group, which is I why I was drawn to it. Peace is not an abstract goal goal for me. It is action. I am not reacting to war or a particular war, I am just doing what I can to be peace. Peace is healing and reconciliation, liberation, love. It is the way I try to live my life.

“Veterans are the light at the tip of the candle, illuminating the way for the whole nation. If veterans can achieve awareness, transformation, understanding, and peace, they can share with the rest of society the realities of war. And they can teach us how to make peace with ourselves and each other, so we never have to use violence to resolve conflicts again” – Thich Nhat Hahn.

I joined Veterans for Peace in March at the Saint Patty’s Day parade in Southie after learning that they had been denied a permit by the Allied War Veterans Council on the grounds that they did not want the word “peace” associated with the word “veterans.” Most veterans I know want peace…within themselves, within society, within the world. Have you read the edicts of Asoka? King Asoka conquered a neighboring kingdom by war, leading to the death and injury of hundreds of thousands of people. He realized that even those who did not participate in war were impacted by it because of their connection and love for people who suffered in its grasp. He renounced war and for the rest of his reign, he conquered by Dharma, by compassion, by upholding and embodying basic principals of respect. A lot of people realize what war is in practice after experiencing it. Anyone who has not experienced it can only speak about it and theorize in abstract terms.

BLAST: And at what point did you become involved with Occupy Boston?

RM: I was there on September 30 and have spent as much time as I can there ever since…I’ve never had a bird’s eye view because I have been a part of creating it. But whenever I walk into the camp, for the first time since I came home from combat in Ramadi in December 2006, I feel home.

BLAST: When Occupy Boston expanded the protest site on October 10, Veterans for Peace arrived in support. What happened that night and early Tuesday morning?

RM: I was at OB all day and beyond the original nightfall deadline given by police. I left to go to the VFP meeting in Cambridge After another member received a text from someone at OB that the police still planned to come, I looked at twitter on my phone and read a few of the tweets coming through on #OccupyBoston to the group. After a vote on it, we headed to OB to provide mutual support and encouragement. After arriving, we were warmly welcomed and the morale of the group seemed to improve. I suggested to the other veterans that we recite our oath and they asked me to lead it. We walked in a line around the group and I said the oath with the people’s mic. We went to the original encampment and did the same thing. When we returned to the second encampment anticipating police, the people were saying together, “We have a permit. It’s called the Constitution.” Not long after 1 a.m., the police arrived and we took our place between them and the people, continuing to sound off with our oath mixed in with the people’s mic regarding our Constitutional permit.