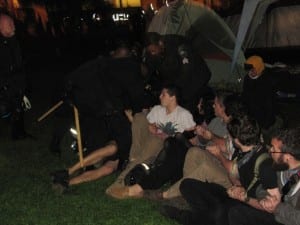 Dozens of the protesters arrested during Occupy Boston’s expansion into a renovated portion of the Rose Fitzgerald Kennedy Greenway on Monday will not face criminal charges if they pay a $50 court fee and accept a civil infraction.

This was done at Boston Municipal Court this afternoon the request of the prosecutors in the office of Suffolk District Attorney Daniel F. Conley, said Jake Wark, his spokesman.

Most of the protesters had no prior criminal record.

“Most had no prior records and had their misdemeanor trespassing charges amended to civil infractions at prosecutors’ request,” Wark said.

But some declined the offer of a civil infraction, equivalent to a speeding ticket, and will now have to press on with their criminal cases.

“A small number insisted on proceeding criminally,” Wark said. “Another small number had criminal records, and they were arraigned with court dates in December.”