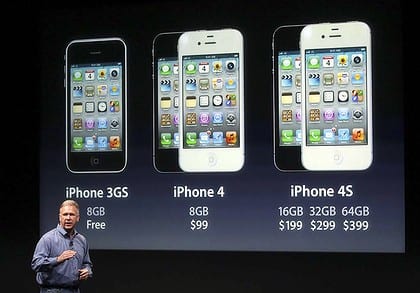 It may not be the iPhone 5 millions were anticipating, but Apple took the stage today in Cupertino, CA to announce the next evolution of its iPhone line, the iPhone 4S.  The new handset will be available for AT&T, Verizon and for the first time ever — Sprint on October 14.

The new 4S looks nearly identical to its predecessors, but according to Apple contains a new A5 processor that’s  is up to seven times faster at rendering graphics and twice as fast at processing data. It also features a new virtual assistant named “Siri” who will respond to voice commands and be able to translate speech in to text. Siri will also talk back to respond to questions. To display this, Apple’s Scott Forstall, a senior vice president for iPhone software asked Siri to find a Greek restaurant in Palo Alto. Siri pulled up the listing from Yelp and said “I have found 14 Greek restaurants; five of them are in Palo Alto. I have listed them according to ranking.”  During the demo she did not say “I’m sorry, I can’t do that Hal…”

“I’ve been in the AI field a long time. This blows me away,”  said Forstall. Among other upgrades, the 4S will also have extended battery life, an 8 mega-pixel camera and the ability to shoot high definition video.

“When you think about it, only Apple could make such amazing software, hardware and services and bring them together into such a powerful yet integrated experience,” Apple’s new CEO Tim Cook said at the press conference.

Apple also detailed iOS 5, which features cloud storage and will be available on October 12.