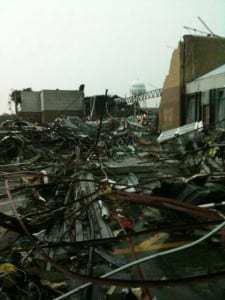 A tornado struck the city of Joplin, Mo., on Sunday, killing at least 116 people and causing catastrophic damage.

Nearly a quarter of Joplin has been destroyed — not damaged, but removed from the earth.

A massive search and rescue operation has been going on in Jasper County, with temporary morgues going up in the streets.

There are reports of casualties and damage at the St. John’s Regional Medical Center, at Joplin High School, at a Walmart, and an apartment complex, with people killed, injured and trapped.

The tornado appears to have drawn a telltale line of destruction through neighborhoods, crushing everything in its path. It also directly hit the hospital.

“There are homes completely destroyed, and there are a lot,” a rescuer in the area said over the radio around 9 p.m. Central Time.

St. John’s reportedly has severe structural damage and is sending its critical patients to other hospitals as far away as Arkansas and northern Missouri.

St. John’s hospital was hit so hard — and the storm was so powerful — that one resident, nearly 45-miles away, reported that his yard was full of medical supplies and x-rays marked as belonging to the hospital.

A roadside temporary morgue was set up in Joplin Sunday night.

There are also reports of casualties at a Baptist church.

Click here to listen to live audio of the search and rescue efforts.

According to KMBC in Kansas City, Doug Heady, the chief meteorologist at KOAM-TV in Joplin, said “the storm flipped tractor-trailers and cars. People are reported to be trapped in their vehicles.”

The station also reports that the roofs at two fire houses have collapsed.

House-to-house searches are going on, and there are reports of looting in Joplin.

Meteorologists believe the tornado was at least an EF-3 classification. Reports indicate it may have been more than 3/4 of a mile wide.

The National Guard has been activated and a state of emergency was declared.

KOAM and Fox 14, both of Joplin, have taken to Facebook to keep viewers informed.

KOAM photographer Crystal Albright, at 15th and Range Line in Joplin, reported that a Burger King restaurant was gone and a King’s Palace Chinese restaurant was on fire.

AccuWeather reports that some 50 tornadoes struck the Midwest Sunday. More thunderstorms rocked the area on Monday.

Joplin in in southwest Missouri, near the Kansas and Oklahoma borders and about 40 miles north of Arkansas.