HAWORTH, England — For anyone wanting to immerse him or herself in emerald beauty of the English countryside, the quaint Yorkshire town of Haworth is a perfect destination, but for literary fans of authors Emily and Charlotte Brontë, it is a must.

The hometown of the literary sisters most well known for Wuthering Heights and Jane Eyre, is nestled between undulating green pastures and wild moorlands.

The town, which according to the Visitor Information Centre received 160,000 visitors in 2010, retains it’s 19th century charm thanks to a cobbled main street dotted with shops, tea rooms and pubs. A stroll through the center lends stunning views of the surrounding countryside, known for its many hiking and cycling trails and a steam railroad.

For those wanting to pay homage to the Brontë legacy, the Brontë Parsonage Museum and the hike to Top Withers should be top on the list.

The parsonage, the Brontë family’s home from1820 to 1861 where the sisters lived, wrote and died, looks as it would have when Emily and Charlotte composed what have since become classic works of English literature. The museum features manuscripts, letters and family possessions.

“If they’re at all interested in the Brontës, you’ve got to pop into the parsonage,” said Ray Tallon, a museum assistant who lives in Haworth.

“It’s like visiting London and seeing Big Ben,” he said, noting that the museum draws visitors from as far away as Brazil, Russia and Japan, both casual tourists to the English countryside as well as PhD students and researchers on pilgrimages to the Brontë landscape.

Visitors can also enter the church where the sisters are buried and the town’s old apothecary. It sells medicines, candy, bath salts and other old fashioned products as it would have in Charlotte and Emily’s day.

After obtaining a map from the Visitor Information Centre on main street, visitors can hike to Top Withers, the location believed to have inspired Emily Brontë’s Wuthering Heights. The six-mile loop crosses the windy moorlands, the setting of Emily’s novel, and although difficult at times, the hike is worth the challenge.

The first two miles lead to the Brontë stone chair, waterfall and bridge, a location where the sisters came to reflect.

“It’s a good place to go and clear your mind and get in tune with the Brontës,” Tallon said.

The final one and a half miles to Top Withers is a steep trek up dry, rocky moors. The view from the top is as serene as it is forlorn and isolating, and plunges hikers into the novel’s landscape, with Haworth completely erased from view.

“You’ve got to go and see. It gives you a good sense of how desolate it would have been,” said Tallon.

Along the trail last week were Pam and Ken Hart of Rotherham in South Yorkshire.

“It’s the wildness of them and the romance,” she said, explaining the intrigue of Wuthering Heights. 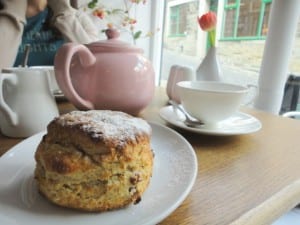 Also along the trail were Margaret Hanley and Margaret Collier two friends from Bolton, England.

“We want to be outside,” Collier said, recalling the first time, 51 years ago, she hiked the trail to Top Withers with her classmates after reading the book and acting in a school production of Jane Eyre.

The moorland trail was also dotted with new groups of students as well as mountain bikers, runners and picnicking families.

In the center of town tourists enjoyed refreshments and browsed shops including Venables and Bainbridge Books, Haworth’s second-hand bookstore.

Douglas Bainbridge, the shop’s co-owner who has lived in Haworth for 27 years, said his customers aren’t always looking for Brontë literature.

“There’s more to Howorth than the Brontës,” he said, recommending the steam railway, plethora of hiking and biking trails and proximity to larger cities like Leeds and Manchester.

He also recommend The Fleece, a Haworth pub frequented by locals and travelers alike. He said the locals’ keenness for a pint stems from the town’s long history in the textile and quarrying industries.

Alison Dean of the Haworth Tourist Information Centre also said the pubs are an integral part of Haworth’s many themed weekends throughout the year, which include 1940’s weekend, 1960’s weekend, Christmas and Halloween weekends and Yorkshire Day in July.

“It’s all in good fun and everybody gets together and has a drink,” said Dean.

To partake in the other English drinking tradition – tea time – locals recommend The Stirrup, a tea room and restaurant located on the main street. It offers tea, coffee, hot chocolate and a selection of homemade scones and cakes as well as hot meals and sandwiches.

The Fleece Inn and Pub, which serves hearty traditional English breakfasts and meals throughout the day, also has a full bar menu and an extensive selection of English cask ales.

Bed and breakfasts line the main road and recommendations can be found at websites such as bronte-country.com.