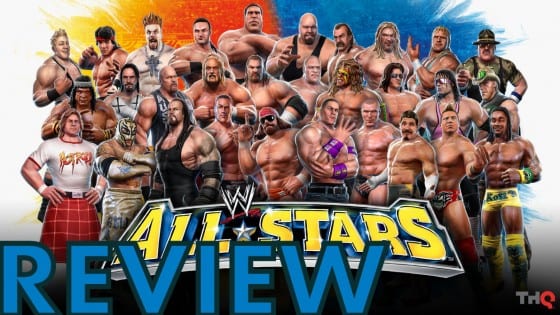 I’m a wrestling fan, but comparatively I despise sports entertainment. I long for the days of Gorilla Monsoon calling

epic confrontations of warriors, immortals and immovable objects.  The days of Kayfabe. When the spectacle was the athleticism of off the top rope elbow drops, and not gimmicks. Back when the McMahon family wasn’t afraid of a panda.

It’s for those reasons that I thought I would love WWE Allstars, THQ’s over the top arcade style wrestling game that pits the top stars of yesterday against the new generation, but instead, after playing though the game, I felt unfulfilled and disappointed.  While the game can be fun when played with a number of people, it gets old incredibly quick and leaves a lot to be desired.

Unlike the WWE Smackdown VS Raw series which comes off as more of a simulation, All Stars presents the WWE stars as if they were action figures, and finds even the biggest competitors doing over the top, flashy maneuvers that send them flying into the air. The roster is full of legends like Hulk Hogan, The Ultimate Warrior, Andre the Giant and Randy “it’s about fucking time” Savage along with some of today’s biggest names like John Cena, the Miz and HHH. Oh, and they brought Kofi Kingston with them as well. The legends thing has been done before, like in the majority of the recent Smackdown VS Raw games and the Legends of Wrestlemania game that hit a few years ago.

Sounds great right? Strip away all of the WWE flash, all of the legends, all of the memories and you’re left with a rather thin package. Think about it, if the exact game was available, minus the license, how would you feel? All of the match types you’d expect are here, from single to tag team, extreme rules and steel cage match, but they all come off playing out remotely the same. The roster is broken down in to four categories, brawlers, big men, acrobats and grapplers, but there’s very little strategy since most of the roster plays exactly the same.  This goes a long way in ruining what is the biggest draw of the game, playing as your favorite stars of generations past. What’s the point in being excite to play as Jake the Snake Roberts if he plays exactly the same as say Bret Hart or Mr. Perfect?

To its credit, WWE All Stars is easy to pick up and play, at first. It employs basically the same control scheme as the excellent n64 WWE grappler No Mercy, with buttons for strikes and grapples, but then throws in a few odd additions. One button runs at the ropes, but you’ll have to switch over to another button to get out of the ring? There’s a different button to reverse grapples than there are strikes? Really? Finishers are another issue, as once your meter fills, you hit a button to activate an animation that sets you up for a your specific move. Here’s the problem with this though, your enemy can attack you while you’re doing the taunt that sets up your finisher, and if that happens, you lose the finisher. Oh, and AI opponents are constantly no-selling finishers. 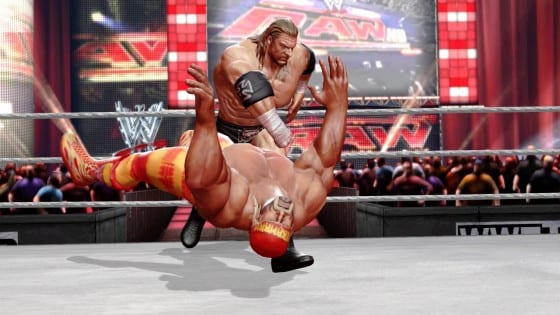 Pow, right in the kisser.

The game’s best mode is easily the fantasy warfare, which pits a superstar from today against one from yesterday for a specific title. For instance, Andre the Giant VS The Big Show is for best big man, while pitting the straight edge superstar CM Punk VS the beer guzzling Stone Cold Steve Austin is to determine the better lifestyle choice. Each bout is presented via a click intro that chronicles both superstars careers featuring actual video footage. The matches are fun, and are no different than if you were to do them in exhibition, but they’re fun none the less. It would have been nice though to have the results of matches online so we can see who is really winning these fantasy warfare matches rather than just who is winning them on our consoles.

It’s a shame that the rest of the game doesn’t feature the fantasy warfare mode’s slick presentation values. In fact, the game feels like a missed opportunity in that aspect. Sure, the Path of Champions mode has animated and fully voiced scenes depending on which path you choose, but that’s just your opponent cutting a promo looking at the camera. Also, the choices of Path of Champions seem a bit off. You choose whether you want to try to fight Randy Orton at WrestleMania, The Undertaker at Summerslam or DX. Since when is The Undertaker associated with Summerslam? Wouldn’t it be cooler to try to snap the dead man’s undefeated streak at Wrestlemania?

There are also no Path of Champions modes for the newer guys to take on the legends. Why not build up to facing Hogan at Wrestlemania? The game seems void of any real sense of WWE history, when I pit Hogan against Savage, I want to see a video package chronicling the Mega Powers and their rivalry throughout the years. The Legends of Wrestling game from a few years ago did a great job celebrating the history of the company and the sport, WWE All Stars merely using it as an accessory. Oh, and the commentary of JR and The King is just and random and annoying as ever.

The Blast Factor: WWE Allstars is at it’s best when playing with a group of friends, but even then it feels like a thin, wasted opportunity. As a full $60 game, it’s tough to recommend, perhaps if it were a  digital download title for half the price it would be the other way around. WWE All Stars seems like a forced attempt to win over the market from yesterday, but still cram the stars of today down our throats.

WWE All Stars is available now from THQ games for the PS3, Xbox 360 and Wii consoles. A copy of the game was provided to Blast for review purposes.