For your listening pleasure this week, there’s new stuff from your beardy folk-favorites, a slice of 21st century disco, and a video treat from this year’s unofficial victors of Austin’s SXSW festival. Feel free to let us know what you think of the week’s picks in the comment feed below. 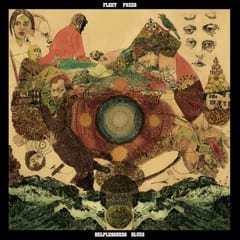 Ever since the release of their 2008 EP “Sun Giant,” Seattle-based baroque popsters, Fleet Foxes have cemented themselves as the sweetest sounding folk act of the day. Their second full-length album, “Helplessness Blues” comes out in early May. The title track from the new record gave us our first taste of what the band has been working on since wrapping up a tour that lasted almost two years off the back of their self-titled debut. Though pleasing enough, the first track seemed to signal that FF were heading more in the direction of Mumford & Sons-esque energized acoustic riffs than the delicate harmonies of earlier tracks like “Mykonos” and “White Water Hymnal.” “Battery Kinzie,” however, confirms that the sun-dripped melodic vocals and keys of the band’s back catalogue will remain prominent on their new release. The song is available to stream on onethirtybpm.com and is sure to put you in the right mood for the mellow summer that (we promise) lurks just around the corner.

English trio, Friendly Fires gained critical acclaim in their homeland two years ago with their eponymous debut, which blended a soft, spacey nu-rave with solid lyrical hooks. This year, the band returns with yet more boogie-inducing disco punk. Aside from the superb single “Jump in the Pool,” tracks from Friendly Fires first LP failed to receive much attention on this side of the Atlantic. Perhaps the new single “Live Those Days Tonight” will be the track that rewards the band with a floor filling US hit (or at least a wallet-filling spot on a few TV commercials). “Live Those Days Tonight” is available to stream via The Guardian Music Blog, an excellent source for music snobs of all tastes.

Since their appearance on Late Night with Jimmy Fallon last month, the hype surrounding LA hip-hop alliance, OFWGKTA (Odd Future, for short) has been nothing short of astronomical. The video for (unofficial leader of the crew) Tyler The Creator’s single “Yonkers” has become a bona fide Internet sensation and only, the Warlock himself, Charlie Sheen has appeared on more magazine covers in the last month. The fantastically foul-mouth Cali youths made numerous appearances over the course of last week’s SXSW festival in Austin, TX. In the wake of their warpath through the Lone Star State, O.F. left a trail of dropped jaws and mosh-pit injuries. Introduced as “the future of the music industry” by P. Diddy at one gig, and ending another after just a few songs because of a lack of crowd enthusiasm; the stories of Odd Future’s Austin insanity will likely continue to surface throughout the summer months. The footage we at Blast have picked to share with you is from Thrasher Skateboard Magazine’s  “Death Match Texas Party.” Anchors of the OFWGKTA clan, Tyler and Hodgy Beats (who you might recognize from Fallon) took to the stage, then the top of the amp stack, then the roof, before tearing it off, for their performance of “French.” You can witness the madness of the show below. Whether you like it or not, Odd Future are crashing into the American cultural psyche with more balls and less apology than any hip-hop artist since NWA.