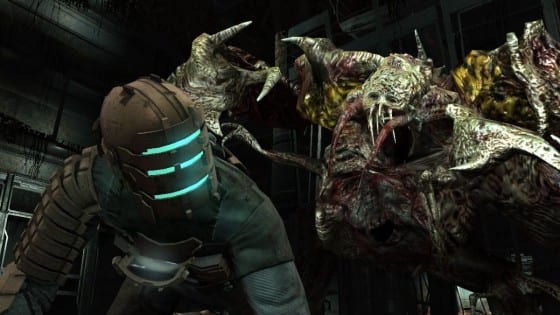 Isaac Clarke is back for another wacky adventure! If by “wacky” you mean dark, disturbing, grotesque, and ultra-violent. The original Dead Space was one of the best games of 2009 and certainly one of the best horror-themed games

in years. The game’s take on science fiction terror took the typical survival-horror stereotype and revitalized it with a hefty dose of pure action, along with the ever-entertaining dismemberment-focused gunplay.

Isaac Clarke may have destroyed the bizarre alien-created marker that the Scientology-like cult, the unitologists, worship in the first game, but you can’t keep a good monster infestation down. Dead Space 2 doesn’t waste a second throwing Isaac into a new nightmare. He wakes up in a straightjacket, having horrible visions and questioning his own sanity, when the horrors he faced on the USG Ishimura are suddenly back.

Now aboard a giant space station city known as the Sprawl, Isaac finds deja vu all over again, but on a much larger scale. Where the Ishimura felt like a more intimate and claustrophobic environment for horror, the Sprawl lets the vile necromorphs wreck havoc through schools, churches, shopping districts, apartments,  and everywhere else that the creepy crawlers can reach. As a result, there’s some truly twisted stuff here.

Familiar monsters return, but with a broader environment come creatures that use the open space more effectively. Infected children have become pack-hunting creatures that use surprisingly effective tactics to trap Isaac. There are exploding babies, vomit-spewing pukers, spitters, and some truly foul and massive boss creatures. Thankfully for Isaac, pretty much all of them can be shot apart with a wide-array of fire power.

While the guns from the first game return, new toys include a spear shooting javelin gun and a mine layer. The javelin gun in particular seems a bit redundant since Isaac can telekinetically pick up any sharp object (of which there are a shocking amount, including the limbs of necromorphs) and shoot them at high velocity. Mines are a particularly good tactical choice, since the hunter creatures are exceedingly good at tracking you, so laying traps for them can help thin out their often overwhelming numbers. 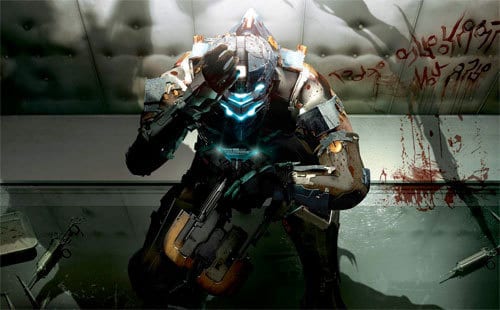 Numbers is a big part of Dead Space 2. Everything feels bigger, even if it’s often merely the illusion of scope. Though a fair portion of the end game moves into the close quarters and corridors, most of the levels open up into huge rooms with massive windows. There are a lot of apartments to stalk through and unlike the first game, there’s no doubt that the Sprawl is someplace where civilians were living right up until the point where they died truly horrible deaths.

Gored bodies are everywhere and the game is full of indiscriminate carnage. The necromorphs spared no one, and the addition of the unitologist families who were so brained washed that they actually prepared for their last moments happily makes the gruesomeness even more effectively disturbing. So, there’s no doubt that Dead Space 2 works as a horror game.

Even though the pacing is frequently action-oriented, the nature of the enemies and how they attack makes the game the most effective monster game you’ll likely see all year. On the standard difficulty level, the levels can be brutal, but not unmanageable, and the superbly refined gameplay and atmosphere make Dead Space 2 insanely addicting.

Targeting is vitally important here, since dismemberment is key to quickly killing things, and controls are tight, intuitive, and effective. The camera is amazingly adept at keeping up with the action, while still keeping the view slightly claustrophobic. It seldom gets in the way, and you won’t have to adjust it in an unnatural way like so many third-person games.

That said, Dead Space 2 still sticks close to the formula of the first game and most similar games in general. Isaac is hardly his own man here. Missions are relayed from strangers via video or audio comms, and he is ultimately just an errand boy through the game. While this narrative-heavy method works in keeping the plot and action moving forward, it just feels amazingly cliched at times. Thankfully, Isaac actually speaks this time around, so he feels like an actual person this time around.

The one aspect of the game that is completely new is the multiplayer. Like a more horrific take on Alien vs. Predator, these team-based games pit teams of necromorphs versus humans. The result is an amazingly distinct online game. Short of AvP, there’s no other multiplayer game that will let you play as a standard marine-type human or a scary, wall climbing monster. Humans inevitably will be trying to use switches to complete goals, while the necromorphs are simply trying to stop them.

Since the necromorphs can respawn anywhere on the level they want and see human skeletons through walls, devious players can effectively act like a monster and sneak up on unsuspecting prey. While the overall survival horror nature of the multiplayer might not distract players from Black Ops in droves, it’s the most creative take on deathmatches since Assassin’s Creed Brotherhood.

There’s no doubt that you could nitpick Dead Space 2. The gameplay is hardly changed at all, and too much of the time, you’ll feel like little more than a badass errand boy. That said, the pacing, atmosphere, controls… well, nearly every other aspect of the game is refined, tense, and enthralling. Dead Space 2 is so addictive that it will suck your hours away well into the night. Just make sure you’re not too squeamish.