The iPhone is essentially an efficiency tool. While most of us think of efficiency in terms of work or school, the iPhone makes us more efficient in any aspect of life. So, in honor of spring and St. Patrick’s Day, we give you three apps for (efficiently?) getting your drink on.

Happy Hour– This free app finds you food and drink specials in your area. The app is unique in that its rankings are based on what those that have been to an establishment say about it, so users get up to the minute information on the good, bad and ugly about any prospective watering hole before committing to it. Users can click through any location that might interest them to see a menu, amenities and hours. The app only works for 35 major cities, but if you’re in one of them, this app is a must own.

Interactive Cocktail Entertainment (ICE)– ICE doubles as both a handy recipe guide to all your favorite drinks, and an educational game that teaches you how to make those drinks. Users can play in different game modes, from practice to becoming a professional bartender having to make drinks for impatient customers on a time crunch, both of which teach users how to make their drinks in a fun way. The list of cocktails is not nearly as long or detailed as some other recipe guides out there, but for those that want to learn to make famous staples while playing a free game, this app is perfect.

Toasty– No one wants to pull a Michael Cera in Superbad and blank on what to toast to. Having a good toast ready at all times is an important weapon in any drinker’s arsenal. Those in a pinch can launch Toasty and simply shake their iPhone, which in turn scrolls through a nearly infinite list of interesting or funny toasts, until they find one that suits their needs. Not a groundbreaking app by any means, Toasty is a fun app full of useless facts that even non-drinkers can enjoy. 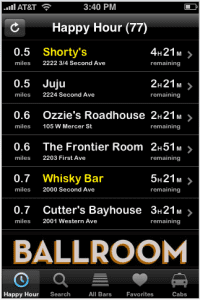 Insiders are reporting that the iPhone 4.0 software will support multitasking on the device. Speculation surrounding multitasking has been swirling fairly consistently since the iPhone’s inception, but Apple’s response to the most consistent criticism against the iPhone seems imminent now.

Since jailbreaking iPhones became popular, it has become readily apparent that the problem with running multiple third-party applications simultaneously was not a technical one. To take that one step farther, the iPod application, despite being native, is still just an app, and users can run it concurrently with some other apps on the phone. It is Apple’s security setting that prevents the phone from multitasking. This seems reasonable enough, considering running one app at a time eliminates the potential for viruses and spyware, lessens the drain on battery life and erases the need for communication between apps to allocate the iPhone’s resources.

However, people love their social media and instant messaging apps (among many other apps whose functionality would greatly increase if multitasking were enabled). Instead of checking into the applications to carry out a function, it would be much more efficient if the user could run these apps and be able to seamlessly glide in and out of them as needed. While an argument for push notifications can be made, they are a cheap substitute for actually having an app open and fully running while carrying out a function in a different app, especially since many applications can’t take advantage of push notifications for their functions, like foursquare (Wouldn’t it be nice to run the app and have it check in on your location periodically without any work on the user end?) or Pandora.

The biggest problems Apple will have to address when creating a multitasking platform are crashes and poor performance and an intuitive system for iPhone users to switch between applications. I would be in favor of holding down the center button to bring users to a menu with all the running applications on the phone and the ability to launch new apps from the home screen, and moving the voice-enabled phone execution to a new home, as users will undoubtedly use the multitasking function more than it.

Apple can’t afford to wait any longer on multitasking for the iPhone or they run the risk of losing developers for the platform, and subsequently customers, especially with all of its major competitors already enabling some form of multitasking on their platforms. If I had to guess as to why multitasking has yet to reach the iPhone, I would say it is because of the rigorous demands that Apple puts on their product’s functionality before they release it to the public. Multitasking on a device with such limited capacity as a smartphone is a complicated issue for Apple’s developers, though I expect that when the iPhone finally does support multitasking for third party apps, it will set the iPhone apart from the competition.