To the entire world’s surprise, a multiplayer demo for EA’s upcoming shooter Battlefield: Bad Company 2 came to Xbox Live today and with it high expectations. 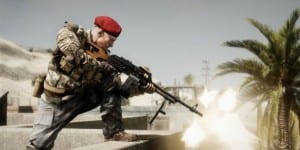 Get in on the action...today!

The demo is multiplayer only and like the PS3 version we covered last month, features only one game-mode played on one large environment, Port Valdez in this instance.

Snag the demo on Xbox Live today and if this version is different enough to warrant another hands-on preview, we’ll have that live on the site later today.