I’ve been hooked on arcade light-gun shooters since I played the original House of the Dead all those years ago. The zombie genre has, for the most part, lost its horror component and is now firmly entrenched in the action-adventure genre with the added bonus of much more gore. Capcom’s follow up to Resident Evil: Umbrella Chronicles follows a similar method: two recreated stories (Resident Evil 2 and Code Veronica here) with an original story that binds the two together. It pays homage to the original fans while drawing in gamers who are unfamiliar with the game franchise’s mythos.

The game opens up with "Operation Javier." Leon S. Kennedy and his new partner, Jack Krauser, explore Latin America while trying to find the head of a major drug cartel with ties to the Umbrella Corporation. When zombies appear, Leon recognizes that there’s trouble ahead, while Jack wonders about what he’s gotten himself involved in. Leon then explains the events of Resident Evil 2 in "Memories of a Lost City" and Claire Redfield’s story in "Game of Oblivion." With 5 playable characters (Jack, Claire, Leon, and Steve Burnside), we’re thrust straight into the world of Resident Evil and experience the some of the earlier games from an updated perspective.

This is an on the rails shooter in the vein the House of the Dead series, which isn’t that bad. The style is a fitting way to retell the stories while focusing on a new element of gameplay for the series. In an attempt to preserve the horror based nature of the original games, Capcom made sure that the when you move the Wii Zapper the camera moves with you. This makes it seem as if you are actively participating in the game instead of on a set track. It’s an interesting concept, but it isn’t fully realized. If you’re worried about playing the game with the Wii Zapper, you should know upfront that you can still play even without the Wii Nunchuck. The game’s functionality allows it to be played with solely the Wii remote.  You can still pick up peripheral items such as weapons and medicine and use them as you go through the game’s levels. Aside from that, you’re just along for the ride. You can switch between weapons by applying the weapons to the directional arrows. A quick tap will switch weapons quickly in order to effectively fight off enemies. As you explore the game, you can find pieces of gold or hidden files which allow you to upgrade your weaponry and expand the story, respectively. This helps new players understand the story better with a look down the rabbit hole, while veterans of the series will be able to enjoy the power that comes with weapons upgrades. 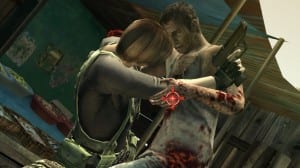 Visually, this game is a labor of love to the original games. While the plots have been cut down to the essentials, the attention paid to the details of some of the more iconic settings from Resident Evil 2 and Code Veronica is simply amazing. Old fans of the game will want to play this game if only to see the events unfold in such a visually stunning manner. While it retains the anime quality, there is also a level of realism involved which complements each other well and draw you into the game.

Now that you have a basic overview of the game’s strong points, we need to focus on several major weaknesses. One of the biggest problems with this game is the AI. When playing solo, the AI doesn’t really help out that much and for the most part, I felt I was playing alone since I was the only one taking out the Infected. Not only does the AI not help you fight through the game, it screws you over every chance it gets. If you’re tempted to turn your back on the path you are heading to see what’s going on behind you, I warn you: don’t. Just don’t. When you turn around you will be pleasantly surprised by the wave of zombies which have come to maul you to death when you’re not looking. Whenever that happened, I would lose a large amount of life or be killed straight off. This aggravated me to no end, especially in conjunction to the camera movements. 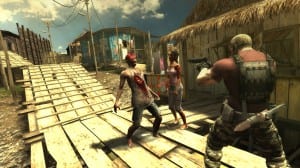 While I understand that the camera movement is designed to simulate human head movement and maintain a horror vibe, but it comes off as an annoying aspect of the game. In House of the Dead, you point the Wii Zapper but the screen remains static. This makes it easier to aim. In Darkside Chronicles, the erratic nature associated with the Wii Zapper’s movement *can* induce motion sickness. When playing multiplayer, the only weakness that came up is that you can’t jump straight into the action like with House of the Dead or Dead Space Extraction. Instead, you need to wait until you’ve completed the round before you can bring in your partner to take control of the AI partner. That, and the shared ammo depot which one player can run out for both if you’re not careful, are the two things which bring multiplayer down.

Blast Factor: This is a decent on the rails shooter which will be a fun trip down memory lane for veterans and something interesting and entertaining to draw new gamers into the series. The game is sleeker than Umbrella Chronicles and recreates classic scenes from the franchise’s history in a new way. The three central stories come together in a relatively neat manner and the game has a lot of replay value since you can run through each scenario from two perspectives and take different paths to make it through to the end. You may find the Wii Zapper controls a bit obnoxious, but once you get over it you’ll be able to enjoy the game. It’s a solid video game and a decent shooter for the Wii, so if you already own House of the Dead 2 & 3 The Return or Dead Space Extraction then pick up a copy of Darkside Chronicles during the Holiday Sales.