Tim Schafer, head of Double Fine Productions, the team behind the metal-infused “Brutal Legend” appearaned on Jimmy Fallon’s late-night show yesterday, and in if you were otherwise committed and had to miss it, we’ve got the interview in its entirety. 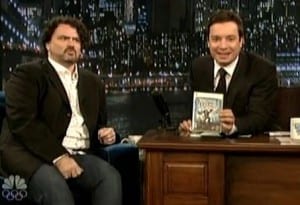 Talking points in the video include the inclusion of Jack Black, just where the hell the idea for the game came from, and some metal-history.

I love Jimmy Fallon and what he’s done to late night. From day one he’s promised to make gaming, and gaming news, a focal point of his show. And with past appearances by Project Natal devs, Tiger Woods in a‚  PGA Tour ’10 showdown, Tim Schafer’s appearance last night, and Fallon’s overall goal to “treat video games [releases] like movie openings,” we think Fallon is well on his way to snagging that new demographic..gamers!