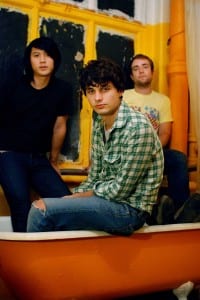 NEW YORK — The members of Brooklyn trio The Jaguar Club claim to have been in some of the most unfortunately-monikered bands in the history of music, including Finer Things and The Huxtable Residence.

They came up with “The Jaguar Club” after drummer Jeremiah Joyce came across the intricate logos of organizations of car devotees one day while doing a Google Image search.

“It’s never been a strong point” according to Joyce. “We were terrible at coming up with band names.”

Blast chatted with The Jaguar Club at their record release party at Brooklyn’s Union Hall last month. Since forming in 2006, the band has released two EPs. Their first full-length album, “And We Wake Up Slowly” was released September 1.

Joyce and bassist Yoichiro Fujita met while both were students at Vassar College and eventually moved to the Williamsburg section of Brooklyn together.

Also Get to Know:

Meanwhile, singer Will Popadic, a former Emerson College student who had recently relocated to New York from Los Angeles, posted an ad on Craigslist saying he was looking to meet like-minded musicians.

“It was just so nice and warm and friendly” Joyce recalled thinking upon coming across Popadic’s ad. “He was like, “ËœI just moved to New York…”Ëœ”

And the rest, as they say, is history. The newly-formed group began writing songs in the spring of 2006, released an EP that fall, and toured extensively up and down the East Coast in 2007.

“And We Wake Up Slowly” was recorded earlier this year in an 300-year-old barn in New Paltz, in upstate New York “" a stark contrast to the Brooklyn basements in which most of the songs were written. The band members say the experience was a bit like camping, with musical instruments scattered around the converted studio, which had no running water.

“It definitely took us out of our element” Popadic said. “A lot of the sound and texture is a product of being there.”

“You just feel so liberated from everything back in the city” Joyce said. “It feels like home, for me.”

In fact, much of the record deals with typical quarter-life crisis themes, one of which is “being a country mouse in the city” as Popadic puts it.

“I don”Ëœt love cities, but I have to be in them to do this” said Popadic, who is from rural Massachusetts.

The members cite Oasis, Band of Horses, The National, Idlewild, and Radiohead among their influences. Their sound, at times, resembles what The Smiths might have sounded like if they’d been an arena rock band. Popadic’s vocals bear more than a passing resemblance to David Byrne’s, with occasional theatrical warblings like those of Rush’s Geddy Lee.

Still, feeling that their sound was a bit lacking, the trio recently added a second guitarist for live shows, Gavin Dunaway, who had been living in D.C. and had seen the band perform several times.

“We were always looking for ways to make (our sound) bigger” Joyce said. “He’s like a new pair of socks. They’re so instantly comfortable, and yet they’re new.”

Dunaway’s proposal for a new band name? “Gavin and the Jerks.”

But for now, perhaps out of necessity, it seems “The Jaguar Club” will stick.

“We had a small window of opportunity (to change the name)” Fujita said, as his bandmates considered their newly-minted LP. “And now it’s too late.”