SEATTLE — In theory, MAG sounds great. You play along with 255 other people in a first-person shooter, fighting skirmishes that are part of a much larger battle. If you envision it, you get this feeling that you’re part of something much larger, that you’re helping a bigger cause with your actions. When you do get to sit down and play it though, those feelings may be fleeting, and from what I gathered, it seems like you feel like you are playing, well, any other first-person shooter with multiplayer.

From a technical and gameplay standpoint, MAG is rock solid. It looks good, though there are better looking shooters on the system (thanks, Killzone 2!) and it plays well–this shouldn’t be a surprise, given Zipper Interactive, the team behind SOCOM, is responsible for this game. The problem is that, in the time I played the game myself, and the time I spent watching others play–I may have been the other person in the room responsible for harassing afiercepancake all around the map–it didn’t feel like you were fighting in part of a larger battle. It felt like you along with two dozen or so other players, somewhat relegated to a specific area based on your spawn points and squad designation. If 256 players is the hook, and you don’t notice the hook while playing, you may have a problem, though there may be reasons for this that the demo didn’t explain. 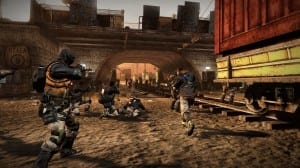 Now, there are a few things that could have been the fault of PAX, rather than the game. We did not have headsets, so voice chat was not an option. Squad-based gameplay necessitates headsets, and we may have felt like more like part of a larger unit were we donning them. Second, even without the big hook mentioned above, it’s still fun gameplay–you have specific targets you are supposed to take out, so it isn’t straight death match style gameplay, and if you work together with others to take out those targets and move on to the next area safely, then the game improves significantly. 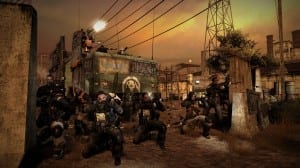 There are some features we didn’t get a chance to check out–MAG has a chain-of-command system that allows you to lead different sized groups of troops, from an eight-man squad to a 32-man platoon to a full-sized, 128-man army. There’s also a “Persistent Shadow War”, which moves back and forth on the world map depending on how well your hand-picked PMC performs each round. I think I’ll have more of an appreciation for MAG once I get to see these items in action, as they could help separate the title from the other FPS on the market.

I don’t mean to sound too hard on MAG–this is, after all, the first bit of time I have spent playing it live, and as stated, the lack of headsets may be clouding what the game is truly trying to offer us. Luckily, we are part of the next wave of beta testing, so we will be able to report further on this for you, including how we feel about the game with the use of headsets and more strategic, planned-out actions. This is a bit of a shorter hands-on preview because of it, as testing the game in an improper environment doesn’t work well for it.