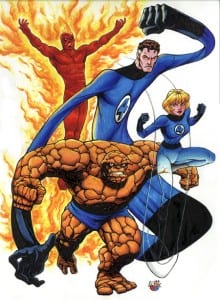 In the wake of breaking business news yesterday about Disney’s decision to buy Marvel Entertainment for $4 billion, we’re already seeing a headline that runs contrary to our 10 possible Disney/Marvel crossovers.

20th Century Fox, not Disney, has announced plans for another Fantastic Four film with a new flick produced by Akiva Goldsman and written by Michael Green.

Goldsman is currently producing movies based on DC properties “Jonah Hex” and “The Losers,” while Green is co-writing “Green Lantern” starring Ryan Reynolds and is the co-executive producer of “Heroes.”

There is no word on whether or not Ioan Gruffudd, Jessica Alba, Chris Evans and Michael Chiklis will return for a third go around.