Nintendo loves their launch events, and to get Fossil Fighters going in North America, they held a launch event at the La Brea Tar Pits so that kids could get a feel for the paleontology vibe in the right kind of setting.

Instead of finding fossils though, the kids found “fossilized” copies of the new game, which may not seem as cool as finding an actual dinosaur bone, but please remember you don’t have to donate Fossil Fighters to a museum; you get to keep it and play more than make believe with it! 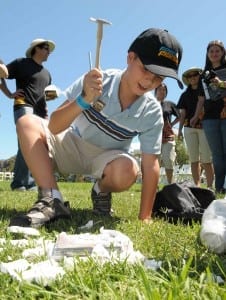 Fossil Fighters was developed by Red Entertainment, who are also co-developing Nostalgia with Matrix Software. You play as a young paleontologist who doesn’t just dig up the bones of old dinosaurs; you dig up fossils capable of coming to life to beat down other living fossils. No word as of yet on whether Joan Rivers is one of these dug up Vivosaurs (kids, ask your parents before watching the Comedy Central Roast of Joan Rivers, hilarious as it may be).

It’s got kind of a Pokemon vibe to it, but with Nintendo on publishing duty, it may have something different to offer those of you that like to collect monsters and bring them to battle. It actually sounds like Spectrobes in a way–especially with fossils being more powerful when you effectively and efficiently dig them up–so let’s hope that they have a battle system that doesn’t make me want to throw my DS against the wall (tell us how you really feel, Marc!)

Fossil Fighters is officially out today, which means you can expect to see it on store shelves soon. You won’t have to dig your own copy out, but at the least, you will still be able to dig up Vivosaurs for use in the game.