NEW YORK — Buckcherry finished the first leg of their Jägermeister Music Tour in February, performing with Hellyeah, All That Remains and The Damned Things. The tour kicked off in San Diego on January 19. We caught up with them at the Best Buy Theatre in New York on February 15. 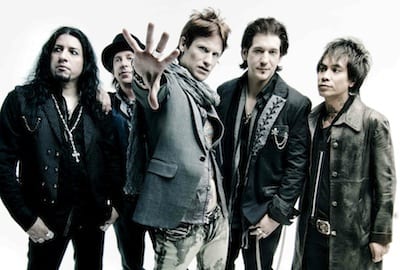 With all those acts, it was a long show; the music started at 6, but Buckcherry didn’t make their appearance until after 9. Given the nature of the bands, I wasn’t surprised the first thing I saw were drunk audience members in a mosh pit. When Hellyeah started playing onstage, the mosh pit just kept getting bigger. When the band’s lead singer Chad Gray shouted and asked the audience, “What the fuck is going on?,” the audience was pretty amused and proud of themselves.

After Buckcherry arrived onstage and started “Dead,” the mosh pit disappeared and people started focusing on the stage. Buckcherry lead singer Josh Todd started the performance with a tambourine during the tune, and he started the first of what would be a night of interesting, if not fitful dancing.

As the mosh pit disappeared and Buckcherry continued to to play, the dynamic and  atmosphere completely changed, as the audience was far more reverent of Buckcherry than the proceeding acts.

The attention was deserved; Buckcherry was great live. Josh Todd’s vocals were very crisp; he kept to the melody and hit the high notes perfectly. When the band played “Rescue Me” and“All Night Long,” Todd was spot on, eliciting a great response from the audience.

When the band played “Everything,” the band used some dramatic green stage lighting, clearly inspiring one member of the audience, who began to smoke his own green. It was strange hearing Todd singing, “I wanna be, I want everything. I want everything” while breathing the pungent aroma of cannabis. Still, due to Jimmy Ashhurst’s bass guitar skills, the whole audience was in awe.

One of the highlights was “It’s a Party,” which drew a great reaction from an amazing combination of Xavier Muriel’s strong beats and Keith Nelson’s edgy lead guitar. Todd got pretty into it, displaying some unique dance moves that were pretty sexy, which inspired some members of the audience to react in a similar get-down fashion. Some say Todd is like Steven Tyler; he’s a little more Mick Jagger in the way he moves.

“Next 2 You” was another fun song focused on Todd’s wide vocal range going along with Nelson’s guitar. After this song, the band’s very first single “Lit Up” was played, to a great reaction from the fans.

Todd’s singing ability can never be merely considered as ‘one of rock singers.’ The emotional ballad “Sorry” totally showed his outstanding talent, as Stevie D.’s rhythm guitar perfectly complimented him. The tune is originally about relationship problems between Todd and his wife, making it easy for most people to relate with. It was very moving to listen to him sing the lyrics, “I’m sorry I’m bad, I’m sorry you’re blue. I’m sorry about all things I said to you. And I know, I can’t take it back. I love how you kiss, I love all your sounds. And baby, the way you make my world go round. And I just wanted to say, I’m sorry.”

Their smash hit “Crazy Bitch” was the last song before the band’s encore. The audience joined the band and the whole venue was singing, “You’re crazy. But I like the way you fuck me.”

Some people began leaving after “Crazy Bitch,” before the encore began; It was surprising that “Crazy Bitch” wasn’t in the encore. I was more surprised that they ended the show by performing “Whiskey In The Morning” from the second album “Time Bomb.” Funny, it sounded like they dropped a bomb right before ending the show. It was disappointing the band didn’t play “Talk to Me,” and a strange ending song.

Still, Buckcherry put on an excellent live performance, one worth catching in the future.

Out of Line
Whiskey in the Morning