Men may generally be considered more tech savvy than women, but a new study shows that these days, women know gadgets, and its the men who are behind the curve.

A new study conducted by Retrevo, a company that matches consumers with compatible electronics, found that although men are confident about the latest gizmos, women are actually more astute when it comes to deciphering tech lingo and devices.

“There’s a myth that men are more technical than women,” said Andrew Eisner, Retrevo director of content for Retrevo. “Now we’re finding in consumer electronics that more women are carrying the ball.”

Debunking the long believed myth, only 17 percent of women who were asked what “1080p” meant answered incorrectly, while 25 percent of men did so, according to the study.

1080p is the abbreviation for a high definition video mode. 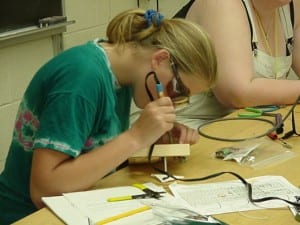 “The other thing we found that was quite interesting was similar to the situation where women ask for directions while men continue to walk around,” Eisner said. “Women were much more willing to admit when they didn’t know the answer. Men went ahead and guessed and got the answer wrong.”

The study revealed that only 55 percent of women consider themselves “extremely tech savvy”, while a whopping 79 percent of men believe they are.

More women than men in the study knew that “MB” stands for megabytes.

This new trend may affect who the industry targets, according to Vipin Jain, president and CEO of Retrevo.

“Every single component of the CE industry has been affected by the recession and is trying to figure out how to make money in the new economy. Our Gadgetology report suggests that women might be the answer,” he said in a statement about the study.

Indeed, the study also found that more women than man would give up caffeine over their computer.

Said Eisner, “Anecdotally we hear about women being the keepers of the camcorder and camera and the laptop.”

Although Retrevo found that more women than men think tech jargon makes it more difficult to shop, the data clearly show that those same women are buying and using gadgets at least as much as men are.

“Advertisers would be very wise to direct advertisements at women,” Eisner said. “So go get ’em.”