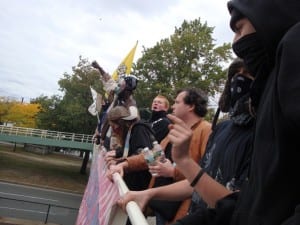 This week, the fourth since setting up camp on September 30, Occupy Boston has increased its visibility through a series of marches including a trip to Harvard Square (by way of the Head of the Charles Regatta), several hostile visits to FOX News and the home of a Bank of America president, angry protests against the police response to Occupy Oakland, and a somber, rainy morning walk to the trial of Tarek Mehanna, 28, a Sudbury man accused of being a propagandist for Al-Queda.

On October 23, about 50 protestors from Occupy Boston took a meandering route from their tent city in front of South Station to “the Pit,” an area in Harvard Square associated with various countercultures over the decades.  En route they temporarily hung a “We are the 99%” banner from a footbridge over Storrow Drive and blocked traffic one-way on the Mass Ave bridge.  They also paraded through the Head of the Charles Regatta chanting slogans such as “we got sold out, banks got bailed out” and “this is what democracy looks like” as a few people gave them thumbs up.

While certain previous marches – boosted by the support of labor unions and student groups from local colleges – have swelled into the thousands, this smaller protest was notable as Occupy Boston’s first excursion outside the city.  Dozens of people along the route showed their approval of the demonstrators; no detractors were obvious.  The protest, though small by Occupy Boston standards, had style.  Marching to a drum beat, they followed three masked flagbearers with the America flag flanked by a “don’t tread on me” flag on each side.  The demonstrators stopped along the route as often as necessary to regroup behind their banner or, even, sit down and decide where to go next. 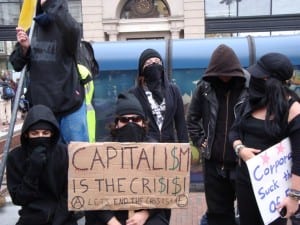 Despite many of the participants being masked or otherwise dressed in a way that might intimidate, the flag-waving march was oddly reminiscent of a patriotic scene from Boston’s historic  past.  A few onlookers seem frightened by this loud group of people unaccompanied by uniformed police.  Some clutched their children or scurried to give the marchers a wide birth.  Most merely gaped.  Plenty took pictures or video.  A few punched their fists in the air to the beat of the protestors’ drum.

Among Sunday’s masked marchers, several are associated with Direct Action, a close-knit cadre of young people within Occupy Boston that plans protest marches and, more rarely, bolder acts of civil disobedience.  But the demonstration also included parents, young children and at least one grandmother, Mary Andriotakis, 53, who came in from Sudbury with her husband, Chuck Andriotakis, 62, and grandsons Levi, Sam and Joe (ages 5, 6 and 11).

“I come into Occupy Boston whenever I can, and I bring whoever I can,” Mary Andriotakis said. “I thought I wouldn’t be able to go today because I have my grandchildren.  But it’s a beautiful day and I brought them.  It’s great for them to be able to be a part of this.” 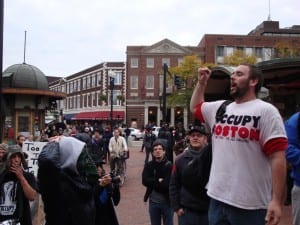 John Murphy, 24, of Falmouth, speaks to people in Harvard Square while wearing a shirt he made back at the Sign Tent at the Occupy Boston campground. (Blast Staff photo/John Stephen Dwyer)

Her grandsons held signs and obviously enjoyed chanting “We are the 99 percent” along with demonstrators drawn from local colleges, towns, and the streets.  At one point, the boys shyly tried out the people’s mic, a movement phenomenon through which a crowd repeats and amplifies a speaker’s words.  Andriotakis, having two children who volunteer at the Medic Tent in the campground, later said “I asked [my grandsons] which they like better, Occupy Boston or the Children’s Museum and they said ‘Occupy Boston, Occupy Boston!’”

After going through Downtown Crossing and cutting through Boston Common, the march turned left at the State House and headed down Beacon Street. They stopped to jeer and flip the bird at what may be the Beacon Hill townhouse of Robert E. Gallery, a local Bank of America president.  Reaching a footbridge to the Charles River, the protestors ran onto it quickly and suspended a banner over Storrow Drive for several minutes on each side.  The banner, the same one they march behind, reads “we are the 99%” and is decorated with white hands on a pink background. Less legibly, “occupyboston.com” is printed above the motto and “and so are you and you and you and you and me” is written in cursive writing below.

When they finally arrived in Harvard Square, protestors held a rally where they used the people’s mic to explain the purposes of their protest.  They also answered questions and talked to people one-on-one.  At the end of the day, the demonstration left the marchers in high spirits.  One elated woman said, “We’ve had marches much bigger than this, but I don’t think we’ve ever seen so much positive attention.  The movement is definitely growing.  People are becoming more aware.”

The group took the Red Line from Harvard Square back to South Station, each person paying their fare.  They re-entered the tent city just as a group of smiling Sikhs was serving hot tea and warm food they had prepared off-site.  By this hour, Occupy Boston was teeming with people who jostled shoulder-to-shoulder to pass along the narrow paths. 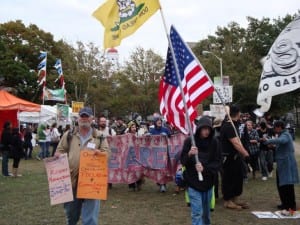 Protestors young and older are visible as Occupy Boston parades through the 47th edition of the Head of the Charles Regatta. (Blast Staff photo/John Stephen Dwyer)

Last weekend, Occupy Boston showed signs of losing momentum as the majority settled into activities that didn’t bring them into contact with those outside the camp.  A march was planned for 6 pm on Saturday night, but when Noam Chomsky was rained out on Wednesday he moved his lecture to that time instead.

An estimated 1,000 people were present but Chomsky, 82, spoke at conversational volume and didn’t use the people’s mic.  Despite him holding two microphones, at least half those assembled couldn’t hear him.  Many occupiers and visitors, happily anticipating Chomsky’s visit for days, had their spirits dashed.

An impromptu march took place when Chomsky finished and culminated in about 100 protestors assembled on the same spot of Rose Kennedy Greenway where 141 people were arrested on October 11.  A tight cluster of Boston Police stood by, frowning and talking into radios.  Using the method of direct democracy popular across the Occupation Movement, the protestors held a General Assembly.  People spoke from atop the gray pumpkin statue that makes a good soapbox.

Despite tough talk about taking that park again, it didn’t happen.  Some didn’t like the idea of doing something so important without the consensus of the whole Occupy Boston community.  Some argued the park should be seized during the day so people working in the surrounding office buildings could see whatever ensued.  Some, it was clear, simply didn’t have the nerve.

Out of the park and into the streets

With the Boston skyline visible beyond crew teams on the Charles River, demonstrators use a hand signal to indicate approval during discussion. (Blast Staff photo/John Stephen Dwyer)

The next day, Sunday, the Occupy Boston encampment seemed to be under a lull.  Certain tents designed for communal functions had lost their identifying signs days before or otherwise appeared closed for business.  A few busy volunteers complained too many people were holed up in their tents avoiding the gritty realities of life in Dewey Square.  Positive energy at the campsite seemed in short supply; even the mellow people at the Sacred Space were getting cranky from the struggle to prevent it from becoming another messy public dormitory.

At 1 p.m., only a dozen people assembled for a march planned by Direct Action (“DA”).  Members of DA, who tend to be younger than the camp as a whole, were livid at the low turn out.  Young men and women clenched their fists and snarled in frustration, “people need to get the fuck out of their tents!” Rather than cancel the march, DA members led their small contingent four times around and through the Occupy Boston camp chanting “out of the park and into the streets” and, specially for this occasion, “out of your tents and into the streets.”

Some habitués of the drum circle agreed to go to the march when confronted by DA members but soon sneaked back into camp.  In the end, about 50 people accompanied Occupy Boston all the way to Cambridge.