UPDATE: CHECK OUT THE FOLLOW UP TO THIS STORY

I remember watching the first episode of Supernatural way back in 2005. As a big fan of the fantasy/sci-fi genre, the show was an immediate hit for me. Demons, witches, and good old fashioned normal people fighting the forces of evil, that’s a gold mine for me. 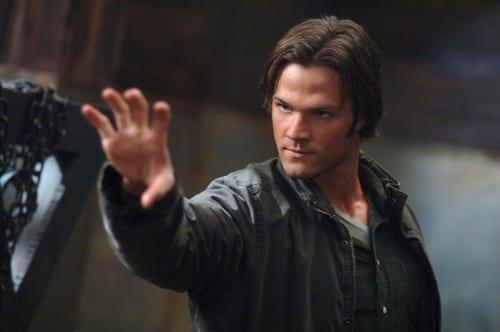 Even back then, when I was considerably less attentive to the aesthetics of a show, I thought Jensen Ackles wasn’t that good of an actor. This was back in the heyday of the WB, when they recycled young actors from show to show.

This was Ackles’s third show (that I know of) on the WB, after stints on “Dawson’s Creek” and “Smallville.” The WB loved doing this (Chad Michael Murray was on what seems to be a half-dozen show before finding “One Tree Hill”); even Ackles’s co-star Jared Padalecki, who I thought had better acting chops, had been a WB mainstay, as a “Gilmore Girls” cast member for five years. For better or worse, the WB just kept shoving no talent pretty boys down our throats—Jensen Ackles, case in point.

Well, fast forward five and half years later, and the tables have completely turned. Not only do I think Ackles has improved by leaps and bounds to completely inhabit the role of Dean Winchester, I find myself wondering on lazy days—was Jared Padalecki completely miscast in the role of Sam?

I’m the kind of guy who goes back and watches shows over and over. It’s perhaps a tad ridiculous, but it helped confirm something I’ve been suspecting four about the last three seasons—Padalecki is a terrible actor. Words can’t accurately describe how pitiful he is at pulling off a role that should carry considerably more gravitas.

Sam’s demon storyline has really shown Padalecki’s flaws. Surely you roll your eyes when he tries to pull off evil or tormented, with that awkward-looking crooked smile thing he does (too much) with the squinted eyes. You know the squinted eyes. He can’t pull of dialogue either. Much of the show is driven by the relationship with his brother Dean, and it’s increasingly obvious over the years that Padalecki can’t keep up with his co-star.

To summarize, on the whole, he’s just a terrible actor. He can’t work with his own face, his vocal inflections are poor, and he just generally ruins scenes he is present in.

Interestingly, you can trace the demise of Padalecki’s ability to act with his ridiculous growth in body mass throughout the series. If you watch the first season, he was a tall skinny guy. The biggest changes come between the second and third, and the third and fourth season, when he just swells. And whatever he was taking removed any lingering ability to portray SamWinchester.

The show is now moving into its twilight, and we start to make observations about the show’s legacy, I think the poor acting of Padalecki is going to be one of the big addendums to the show. The fourth and fifth season of the show really broke open the show and took things to another level, but Padalecki has always held the show back for me.

Compare all this to Ackles. He grew as an actor with this role. He pulls off all the darkness, insecurity and inner turmoil of Dean perfectly; combined with Jim Beaver and Misha Collins and tons of solid performances by guest stars over the years such as Kurt Fuller, Robert Wisdom, and Julie McNiven, the show on the whole has had some stellar acting for a fantasy show. If only the other star of the show could act.