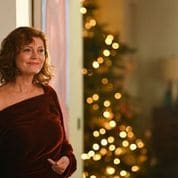 These movies are at once downers and uplifting, and the latest effort to both depress and inspirit is Blackbird. The film is actually based on a Danish picture from 2014 titled Silent Heart (see how long this subgenre has been kicking around), and concerns Lily, played by Susan Sarandon, who suffers from ALS.

The disease has crippled her, but she’s not yet incapacitated or dehumanized. To avoid the eventually decline and living death, she has decided to take her own life—to go out on her own terms. She gathers her family and oldest friend for one last weekend before shuffling off the mortal coil.

I’m not a particular connoisseur of this genre, but off the top of my head, after seeing this, I thought immediately of the Spanish film The Sea Inside, the Canadian picture The Barbarian Invasions, and even a quirky American novel/film called This Is Where I Leave You. All are variations on this melody. This does not include medical awareness films such as Still Alice and a host of other riffs cinephiles could surely point out.

It might be hard to avoid cliché in these types of stories. There’s the daughter (Kate Winslet) with anxiety and control issues. Then the black sheep of the family (Mia Wasikowska). The loyal husband (Sam Neill) who harbors a secret. The filmmakers bring in Rainn Wilson for some comic relief as the son-in-law who’s a walking Jeopardy contestant. Wilson does well in some dramatic moments, but you can sense he’s never more than a smirk away from Dwight Schrute—and this is what the producers desire.

All that said, Blackbird fares ably in this growing and crowded subgenre. The characters are well drawn, even if they feel familiar. There are enough twists in the plot to turn your head just when you want to look at your watch (or phone). It’s not hard for the characters to unpickle whatever problems they have to come together when needed, but the result will not fail to elicit emotion, even from a jaded viewer.

Blackbird has a Hallmark or Lifetime feel even though filmed and scored as a theatrical. Its talent is weighty and its tone sober, but it doesn’t break much new ground. It’s hard to tell how a film about illness and death will be greeted in Covid times. Do audiences want escape or reality? Do they want more and ever subtler versions from this portion of the film catalogue or newer, chancier material?

Blackbird is a good film, an adequate film, but it doesn’t wholly satisfy. It’s a sip of water when you are thirsty, not the gulp you need to take the edge off. It releases in select theaters and VOD the week of September 18th.

Blast rating: 3 out of 4 stars