The ironies are too obvious. The decision to make and release this documentary now are not coincidental.

Rebuilding Paradise, directed by Ron Howard, is a National Geographic Film and will screen in select theaters (and virtually) beginning July 31st. It is a documentary about the destruction—by wildfire—of the town of Paradise, California in November of 2018. 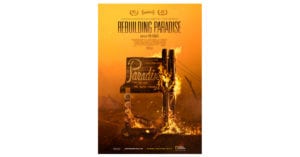 Now nicknamed the “Camp Fire,” even though it appears faulty wiring sparked the blaze, Paradise was overcome in a matter of hours. Dry conditions (after years of drought) and high winds made the fire impossible to stop. It was 11am in the morning but looked black as night, as much of the footage shows, when people fled the town in desperation.

Paradise, population 25,000, saw 95% of its structures consumed and 85 souls lost. The aerial footage in the wake of the fire recalls New Orleans after Katrina and even Hiroshima after the bomb.

When 2020 is over people will think mainly about the pandemic Covid-19 and the hundreds of thousands of lives it took. Despite this horrific number, the disease left buildings and infrastructure intact. It didn’t harm a tree or any animals. It could be a beautiful, still day in the park while thousands were dying. It froze the world but didn’t make a sound.

The disaster in Paradise, CA, one of the worst modern fire calamities on record, was the exact opposite. The fire was ashy, loud (propane tanks were recorded frequently exploding), fleet of foot, and hellishly hot. It was kinetic and visible as opposed to the microscopic way Coronavirus attacked its victims.

As of this writing, we are still in the midst of the pandemic, and any kind of “rebuilding” is hard to fathom or agree upon. We still have yet to come close to healing or any rear view mirror perspective.

What occupies most of Rebuilding Paradise is the work of the townspeople to pick up the pieces. It gives heart-wrenching proof to the maxim: it’s easier to tear down than to build. Yet persist the citizens of Paradise have been determined to do.

Naturally, some decided never to return, and for those who did stay, relationships were tested and sundered. However, the overall tone is one of hope and that a new Paradise can and should emerge from the literal ashes of the fire.

The documentary is standard in its approach and style. It’s informational, not artistic. You’ll get none of the innovation of Errol Morris or the propagandistic flair of Michael Moore here. What Howard does present is a straight forward story of the blaze and the year after, as attempts are made to get Paradise on its feet again.

Howard’s sympathies are surprising. I don’t mean towards the people of Paradise. Who would not feel for them after the destruction of their town? It’s in the aftermath—when the townspeople must face not fire but man—where Howard plants his marker.

As they begin to rebuild, Howard documents the struggles  the citizens of Paradise face against far away bureaucracies. I don’t know Howard’s personal politics, but it wouldn’t be a stretch to say Hollywood’s leanings tend to favor big, regulatory government.

But in this documentary the Paradise of yesteryear is a place characterized as one of few rules and zoning bylaws—and better off for it. In the aftermath of the fire, Paradise has to deal with codes and ordinances and FEMA, and one gets the sense Howard believes bygone, simpler days made a lot more sense. In the least, the sympathies of the documentary seem to stand with the frustrations of these inland, California folks who chafe against the modern regulatory state—one his confreres in coastal Los Angeles routinely support and fund.

Though it would be tempting to see what happened in Paradise through the lens of contemporary politics, Howard mostly steers clear of this. There are some perfunctory mentions of climate change and quick cuts of politicians making statements, but largely the focus of the documentary is on the citizens of Paradise and their personal hardships.

Yet it’s hard to watch Rebuilding Paradise and not think of Covid-19. One gets the sense this film was in the can before George Floyd’s death and any of the unrest that followed. Would these events have impacted the crafting of the documentary had Howard waited, say, six months to complete it?

This is of course difficult to say, but, as is, Rebuilding Paradise, perhaps, gives us a preview of how it’s possible to work together to emerge from a tragedy better and stronger. Can the community spirit and impulse to come together, as demonstrated by the citizens of Paradise, be applied to the nation writ large in the coming years? I don’t know, but Rebuilding Paradise, in many ways, offers a road map to wholeness.