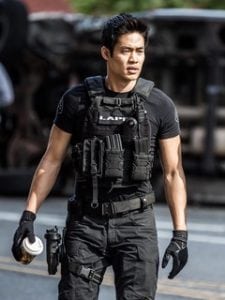 Although he began his acting career later than many of his coworkers, David Lim has shown that it is never too late to pursue your creative passions. After graduating from UC San Diego with a degree in Electrical Engineering, Lim worked as a loan officer for a few years before realizing that he wanted something different from his life. He decided to move to LA and pursue modeling with Ford Models before enrolling in acting classes and embarking on his professional acting career. Since then, Lim has become well known for his time on ABC’s Quantico, where he played Sebastian Chen, and can now be seen on the CBS drama, S.W.A.T. as Victor Tan.

Last week, Blast Magazine had the opportunity to speak with Lim about his thoughts on representation in media, the rise of law enforcement television shows, and the benefits of unique career journeys.

Blast Magazine: Prior to acting, you attended college for electrical engineering and worked in a traditional 9 to 5 position. Do you think that having the opportunity to try other career paths first helped solidify your belief that acting was the right career for you?

David Lim: I think that it really helped. Obviously, there have been times where I have wondered why I didn’t get into acting when I was younger as I could have done the groundwork earlier and been a little further in my career at this point. However, I wouldn’t change anything. I’m glad I went to college and got an education and a degree that I can always fall back on. I didn’t know that I wanted to be an actor when I graduated from college. I got a traditional job and I’m really glad that I took that path. It was great to know what it’s like to work a 9 to 5 in the corporate world. I think having that experience prepped me to make a 180-degree career change.

Blast: Was there a specific moment or event in your life that acted as the catalyst for you to pursue acting professionally?

Lim: I had a quarter-life crisis for sure. I got my real estate license after graduation since I knew I didn’t want to be an engineer. I was working in the mortgage industry and really liked my job. It was good money and I got to help people out. Since it was sales, I had to work really hard and hustle if I wanted to do well in a given month. After a few years, the job wasn’t as challenging to me anymore and I was looking to do something different. I felt like I was meant to do something else but I didn’t know what that was. I was always interested in acting and modeling but I don’t come from a family of artists or actors so I had no clue how to go about doing that. I got on the internet and researched everything from acting classes to how to find an agent. I also was watching a lot of Entourage and thought the life that was portrayed looked cool. After I took my first acting class, I really started to develop an appreciation for the craft and recognized how hard but rewarding it could be. It was then that I got the bug and thought it would be amazing if I could make a career out of it.

Blast: Your latest television project, S.W.A.T., premiered earlier this month. Prior to this role, you played Sebastian on the FBI drama Quantico. What draws you to these action-focused projects?

Lim: I’ve always been attracted to action. When I got into the business, I saw myself doing action and dreamt of being an action hero. I played three sports growing up so I was active and working out year-round. I’ve always kept my body in great physical shape and I felt like this was a genre that I was a good fit for. I love watching thrillers and action films that put me on the edge of my seat. S.W.A.T. came along and I was fortunate enough to get a role and it’s been the ride of a lifetime.

Blast: Your character on S.W.A.T., Victor Tan, was only present in the pilot briefly and few details have been provided on him in the subsequent episodes. What can you tell us about him and how he will fit into this season’s storyline?

Lim: I will tell you that it gets juicy. They created the role of Victor for me and he was not originally in the pilot script. The first few episodes I was just on as a recurring character but after a few episodes, they promoted me to a series regular. Once that happened, the writing staff could start doing more for my character because they knew I’d be around for the duration of the season. When the season reaches the middle episodes in late December and early January, there will be much more of a visible character development for Victor. He gets some really interesting stuff. One of his cool storylines is a potential love interest with a former criminal informant.

Blast: The pilot of S.W.A.T. touched on a lot of topical issues, such as race and police brutality. Will those topics continue to be explored throughout the rest of the season?

Lim: Absolutely. At the heart of S.W.A.T., you have Shemar Moore’s character, Hondo, who grew up in an underprivileged community and now has to police it. That will definitely be a theme throughout the series. We are also going to address other issues that are relevant, such as human trafficking and cyberbullying. At the center of the show, there will always be a focus on Hondo and how he deals with the community of south LA.

Blast: In recent years, there has been an increased number of television shows focusing on law enforcement. What do you think it is about that topic that people are so interested in?

Lim: It never gets old. There is endless subject matter to explore and never-ending cases to solve. We are always hearing in the news about some case that we’ve never heard of before. Additionally, the subject matter can go to a lot of different places. With S.W.A.T., we are going to tackle subjects that are happening in the world today and people will be very interested in that. We are approaching it from the viewpoints of both the police and the community.

Blast: What has been the biggest challenge you’ve experienced in your acting career?

Lim: Getting steady work. It’s a huge challenge for actors starting out to get steady work. For Quantico, it was a challenging role for me because I played a character pretty far away from who I am, while my character on S.W.A.T. is closer to who I am in my real life. Quantico was a challenge for me, but a fun challenge. As an actor, you want to be challenged and pushed and given the opportunity to get outside of your comfort zone. Playing Sebastian on Quantico was one of the most challenging roles of my career. With S.W.A.T., I felt like I was meant for the role. I love doing the action sequences and working with the technical advisors and doing the technical movements. The show gives me a nice blend of action and scenes.

Blast: Although the number is not nearly high enough, there has been a slow increase in the number of Asian-American actors now on television and film. Do you think that there will come a time when representation is more prominent in the media?

Lim: It’s gotten better since I started out. Since I moved to LA in 2009, I’ve seen the roles and auditions get better for Asian-American males, but we still have a long way to go. S.W.A.T. is a perfect example of diversity and inclusion, as it accurately represents what the face of law enforcement looks like. When we were filming, we had the chance to meet a lot of real SWAT officers and there are all kinds of SWAT officers and we try to represent that in our show. Both with our main cast and guest actors, we try to ensure there is diversity. The industry can get better but we’re on the right track.