What made Black Mass, the masterwork of research and reportage by “Boston Globe” reporters Gerard O’Neil and Dick Lehr, unforgettable was not whom it was about—but what it was about. 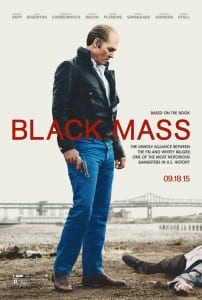 The story of the Bulger Brothers (James or ‘Whitey’ and William), the former an incorrigible criminal and the latter a hard-nosed, corner-cutting politician, and their relationship with childhood friend-grown-up-to-be-an-FBI-man John Connolly was more Boston than the Red Sox or the Charles River. Capturing all these themes and tropes in a two-hour movie would be a tall order for any filmmaker.

The book was released in the 1990s and the movie had a history about as long as Whitey’s time on the run. It always seemed to get rolling only to see a filmmaker or a director pull out. Imitators also delayed it. Why adapt Black Mass when The Departed seemed to touch upon the same subject matter? Why produce Black Mass when the Showtime TV series Brotherhood told the same story only set in Rhode Island? There were more minor players, too, but none directly tackled the Bulger-Connolly story head on.

But in 2014 (released in 2015 on the heels of Whitey’s capture, trial, and conviction) we finally got our movie starring Johnny Depp as Whitey Bulger, Benedict Cumberbatch as his brother Billy, and Joel Edgerton as Connolly. Expectations were certainly high, and the movie does not fail, but it comes up short in being what the book promised and delivered.

To begin with, Black Mass can’t seem to settle on a narrative thread. One can understand this because the true story touches on so many characters and plots that choosing one would almost certainly push others to the background. The problem with the movie is actually the reverse: it tries to have it all.

Black Mass starts out with Kevin Weeks, a Bulger henchman, turning State’s evidence against his former boss. The movie seems like it might be his tale, as we flash back to when he first came to work with Whitey. But then the movie veers to become about the relationship of the Bulger Brothers—a sort of Cain and Abel tale. Intruding upon this is John Connolly’s story, the South Boston born crusader who joins the FBI with an eye on stomping out the Italian Mafia. He needs Whitey and his underworld contacts to do this and thus an alliance is formed. Of course, the partnership becomes corrupt and murderous, as Connolly looks the other way on Whitey’s criminal activities and even shields him from official inquires.

Periodically, we see other former Bulger associates giving testimony to the FBI about him. Is it their story then? Whitey always preached a code of silence, a never rat dictum, but since he was a government informant all along is the story really about this ironic treachery?

This jumble of story lines also prevents us from ever coming to understand the characters. Connolly is the only one who seems to be somewhat defined. His ambition to destroy La Cosa Nostra leads him to the dark side, which tainted and corrupted him. But beyond that we don’t understand the motivations of any other characters. Black Mass the book spent a great deal of time detailing the players’ childhoods, giving us a glimpse into their worlds and lives. The movie skips past all that and we are briefly told about boyhood and neighborhood loyalties, but, in screenwriting parlance, we are never really shown.

Indeed, Black Mass the movie almost doesn’t need one of the books key points of focus: William Bulger. The movie sets him up as a politician who is brother to a notorious gangster and we get little else from his story. About half the focus of Black Mass the book is sliced away, but the movie doesn’t do anything interesting with the character that remains. What the movie does retain as a focal point, naturally, is Whitey but we never understand his character’s dramatic needs. Money? Power? Women? Ethnic superiority? Or, is he just a sociopath?

Notwithstanding the missing character element, it makes sense the filmmakers chose to focus on the gangster aspects, because who would show up to see Black Mass the movie about backroom politics? But even as a mob movie Black Mass doesn’t stand out. The Godfather has a dramatic core that is clear; a son tries to distance himself from his notorious family but finds the lure of it too hard to resist and ultimately rejoins it to lead—though the cost is his soul. Goodfellas tells its viewers straight up that it is a story about a man who always wanted to be a gangster and what that life –in all its glory, depravity, and betrayal—is about. Black Mass struggles to have a core. There are strands of the themes mentioned but they eventually fray. Whitey’s brutality does not sustain, though Depp portrays him skillfully.

As a Bostonian, one who is very familiar with the Bulger/Connolly saga, I was able to follow the story without much confusion, but I wonder how those outside New England will perceive it. Will the plot and all the relationships and tissues of story befuddle? And without any ties to the region, will viewers be turned off by trying to sort out the facts, to the exclusion of a pleasing movie experience?

In the realm of facts, there are a few nits to pick. Though it’s been a while since I read Black Mass, I recall that Steve Flemmi, a longtime Whitey associate, had been working with the FBI before he and Whitey became close. In fact, Flemmi may have made the first overtures on behalf of the Feds to Whitey, but the movie decides to reverse these facts and show that Whitey brought Flemmi into his informing scheme. And once the scheme gets rolling, we are meant to believe Whitey is invaluable to the government because he provides pictures of key Mafia figures going in and out of a building. There is no doubt Whitey’s collusion helped lead to the Mob’s defeat, but the pivotal scene where Whitey’s worth as an informant is cemented is hard to believe. The FBI has cameras. It can’t take a few pictures? I also am pretty sure that John Connolly’s wife was local, but the movie depicts her as an out-of-towner who can’t come to grips with her husband’s dealings with hoods. There is even a bizarre (though quite scary) scene, where Depp’s Bulger at once sexually comes on to and intimidates Connolly’s wife.

In addition, the suggestion the movie makes, that Whitey only went off the deep end after his son and mother died is disingenuous. It is understandable that the filmmakers wanted to humanize him (and Johnny Depp recently made some controversial comments to that effect), but he had been a criminal since early childhood, and to hint he would have been something else ‘but for’ is somewhat disturbing.

One final takeaway. Walk around South Boston, the North End, or Winter Hill today. You’ll see 20-something yuppies renting apartments, high rise luxury condos and upscale restaurants. The world of Whitey Bulger, John Connolly, and La Cosa Nostra, only 20 to 30 years removed from the present, is completely gone. The events of the book and the movie played out when I was a child, just miles from my hometown, but those mean streets today are nothing of the kind. They’re swimming with tech start up money and construction projects. This past year, South Boston was most famous for the Mt. Everest-sized pile of snow from the worst Boston winter ever. Whatever you think of Black Mass the book or movie, it is assuredly a story that exists only in legend now.