Whether you’d heard of him before 2013 or not, Pharrell Williams has been around in the world of mainstream pop longer than many would realize. It’s not hard to see why he’s been flying under the radar since his first album, In My Mind. The record was almost universally received with a shrug and dismissed as a patchy and incomplete. Pharrell then seemed to disappear as he worked as a writer, producer, and vocalist in collaboration with pop mega-stars like Madonna, Beyoncé, and Britney Spears. 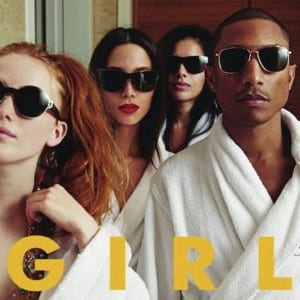 He now returns with a light, breezy album that pulls all the best from his work for nearly ten years. G I R L is an easy listen that carries you through with energy and urgency. A string of guests follow you throughout the listen, from Hans Zimmer to Miley Cyrus. The record is everything you’d expect from such an influential figure in the music industry.

The album begins with “Marilyn Monroe”, where Hans Zimmer’s influence is immediately present in the opening strings of the album. The full, cinematic style gives way to a catchy beat as Pharrell sings about a woman who outshines some of the most desirable women in history. There is a clear Michael Jackson influence in what could be Pharrell’s next chart topper.

The album then flows into “Brand New” with guest Justin Timberlake. Surprisingly, Pharrell is so confident in his sound that he doesn’t do much to emphasize Timberlake’s presence. Both of their falsettos are put on display in a funk-inspired, feel good song that could get anyone out of bed in a good mood.

“Hunter” builds off of the 70s inspired funk in the previous song, offering a soft, bouncy beat that’s reminiscent of Motown. Despite being about hunting down a girl, it comes off considerably more appropriate than the controversial “Blurred Lines” that Pharrell collaborated on with Robin Thicke in summer 2013.

For a song with clear intentions, “Gush” comes off as more sensual than explicit. It’s a relatively light song with a catchy hook that fits well in the context of G I R L.

There is hardly a soul who hasn’t found themselves dancing to “Happy” sometime in the past month. Originally released last year as a part of the Despicable Me 2 soundtrack, “Happy” has found its place in the charts after being nominated for an Oscar. It’s now become the feel good tune for many who can’t help but become swept up in the perfectly simplistic, overly optimistic tone.

“Come Get It Bae” surprises by bringing in guest star Miley Cyrus, who is toned down just enough to fit in with the record. This one could easily do well as a single, as its carefree sound seems like just the beat for a summer hit.

Hans Zimmer returns in “Gust of Wind,” but this time joined with one of Pharrell’s past collaborators, Daft Punk. Most will remember Pharrell’s appearance in the Grammy winning “Get Lucky.” It now seems like the duo is repaying the favor, offering computerized tones that have a clear Pharrell influence.

“Lost Queen” at times seems to throwback to the time Pharrell spent working on Frank Ocean’s Channel Orange, containing elements that remind of Ocean’s “Golden Girl,” co-written by Pharrell himself. The tribal, minimalist sound is guaranteed to comfort any who listen to it.

The hidden track, “Freq” is wonderfully alluring, and sets the tone for the remainder of the album. Preceded by a few seconds of rolling waves, this song no longer carries the fast-paced, high-energy attitude as the previous ones. There are obvious sexual undertones that feed off the rest of the record, allowing it to feel like a part of a whole rather than a disconnected track.

“Know Who You Are” with Alicia Keys is exactly what you’d expect from a song with her as a featured artist, with the addition of apparent ska elements. Keys croons along soulfully without being overstated. The successful track comes off as tender and sensitive.

The record ends with “It Girl,” the perfect end to an album that is more of an ode to women and their sexuality, without being insensitive. The end of this track leaves the listener satisfied and tempted to hit the replay button as it comes full circle, ready to pick up right at the beginning of the record.

Overall, the album was about effective moderation. Pharrell didn’t just bring together the stars and offer a stellar performance, but he knew where to stop. His experience as a producer has only helped him with this newest album. Pharrell clearly knows what the audiences want, and delivered with a fun, light album that favors simplicity and effective communication over complex sounds and jumbled concepts.