To quote a writer or a philosopher whose name I cannot recall… “the only things we [humanity] leave behind when we die are children and art.” The latter part of that statement is a principle that should underpin the film The Monuments Men.  I say ‘should’ because about one hour into the film, the dramatic question of the movie is finally posed: is preserving art worth men’s lives? It’s also repeated at the end of the movie, and here is the problem. Both times these questions are asked out loud. There is no subtext, no metaphor. It’s handed to us on a silver platter. The filmmakers didn’t have the confidence to make art in a film about art. 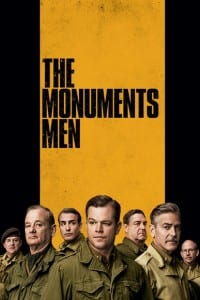 The Monuments Men is “based on a true story,” or so we are told at the beginning of the movie. I put that in quotation marks because it is done so often it no longer has any meaning. It’s supposed to tantalize us, and it frequently does. Indeed, press materials tell me the movie is based on a book, but I think basing something on a true story or a book these days has become more of a marketing ploy than anything else.

True to the source material or not, The Monuments Men tells the story of a unit of US Army soldiers who are tasked with saving precious works of art stolen by the Nazis during World War II. The soldiers aren’t really soldiers, though. They are a group of curators, architects, and art historians impressed into service to rove across Europe (just like the Bastards in Quentin Tarantino’s Inglorious Basterds) in search of purloined art.

Members of the group are George Clooney and Matt Damon, among other known actors, and I can see how this movie came together. Another chapter in the Ocean’s Eleven saga was not in the works, but studio execs could put Clooney and Damon together again, not in Vegas pulling off a heist but in France and Germany thwarting a heist. The pitch might go like this, Ari Gold style: “it’s Ocean’s Eleven meets Inglorious Basterds with a dash of The DaVinci Code.” Need I say more?

I will say more. Though the movie does have some nice moments and is generally engaging it is also quite stiff and expository. The first fifteen minutes serve only to introduce us to the stars of the film. And by this I mean the actors, not the characters whom they are playing. We are meant to be wowed that Clooney, Damon, Bill Murray, and John Goodman are in a romp-across-Europe movie. The fictional characters seem less important, and the exposition is about as blunt and interesting as stereo instructions. Once the nasty business of setting up the plot is out of the way, we can get down to the chase, and this is where the strength of the movie lies.

This film could have taken a lesson from The Dirty Dozen, a similar World War Two movie, which has many characters to introduce but does it in an organic way. Furthermore, we spend far more time with the characters in The Dirty Dozen at the outset, building an emotional connection, so as the mission progresses and some of them die we feel the joy and the loss. In The Monuments Men, we are meant to empathize with the characters when tragedy and victory occur, but since whom they are and their development is so rushed the attachment to their journey does not fully come.

Another film that comes to mind is The Raiders of the Lost Ark (Nazis and stolen treasures and all). That movie is a classic because it builds toward something hugely important, not only for the lead character Indiana Jones, but also for truth and justice. The Monuments Men is too busy, hurtling us from one part of Europe to the next, never spending enough time with a character or set of characters. It is unclear what the actual mission is. Recover lost art, yes, but at times it feels the mission is so broad and wide ranging that we struggle to hold onto any particular story thread. In so casting its audience about, the movie feels unsure what it is supposed to build towards. Thus, the catharsis is less powerful than it should be, and I’m just not sure I cared all that much.

There is a nice statement to be found in this movie. Truly great art can transcend time and is more important than an individual life. Men and women are willing to sacrifice themselves for these principles. The Monuments Men is not a bad film and it touches upon these themes, but in the end what it leaves behind is a bit of a muddle.