It was a little nerdy, funky, energetic, thought provoking, joyous, inspiring, and theatrical. That would be last Wednesday’s Janelle Monáe concert at the Boston House of Blues.

I truly wish I had started listening to Monáe’s music sooner in life. When I finally checked out Metropolis: Suite I (The Chase) and The ArchAndroid, I was in awe. Monáe had combined a multitude of themes and ideas that I love (science fiction, lyrics with a social message, a blend of musical genres, creatively orchestrated music, and a killer voice) into one. The music video for ‘Cold War’, while simple, tugs a tear out of many viewers for being so poignant and honest. Monáe’s latest album, The Electric Lady, came out this September, and the concert showcased many of the new tunes.

When an announcement was made near the end of the show, and Segun Idowu, a special assistant to Boston City Councilor Charles C. Yancey, climbed onstage, the audience peered on in curiosity. Was this planned? What was going on? The entire band and backup dancers/singers had huge smiles on their faces the entire show, and were looking as though they were having the time of their life. However, when the following happened, many of them became emotional, as did Monáe herself.

Idowu presented Janelle Monáe with a resolution, on behalf of Councilor Yancey and Boston, and honoring her with a day, October 16, 2013.

My gut reaction to Wednesday’s show, and the involvement of the City Council, reminded me of how Monáe is changing how women in music are viewed, as well as the fact that she brings so much attention to healthy body image, acceptance of everyone, independence, and more. Lyrics such as ‘When you take off your clothes/All your dreams go down the drain, girl’ (Sincerely, Jane), ‘I was made to believe there’s something wrong with me’ (Cold War), and ‘Hey sister am I good enough for your heaven/Say will your God accept me in my black and white/Will he approve the way I’m made/…Even if it makes others uncomfortable/I will love who I am’ (Q.U.E.E.N)’ certainly help paint the image of what Monáe is fighting for.

While Monáe’s performance was gender bending and powerful, I noticed that the entire band was dressed theatrically and, one might say, as a mix of classy and retro scifi. Not one female was scantily clad. In fact, looking back, it was one of the most diverse concert audiences I have ever been surrounded by (age, race, gender), and the majority of concert goers had dressed up for the show. It was as if people wanted to respect Monáe’s classiness by doing the same in return.

We tracked down Idowu after the show to learn more about how the decision came about, what it means to the city, why he thinks she is so monumental, and what he hopes the gesture conveyed. 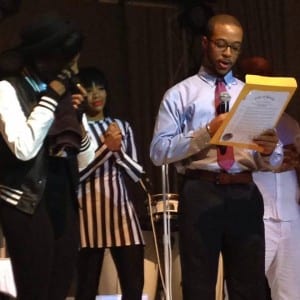 BLAST: How did the idea of presenting the resolution come about?

SEGUN IDOWU: One of my co-workers asked me, in casual conversation, what I would be doing that night. I mentioned that I would be attending the Janelle Monáe concert to support my Morehouse brother, Kenneth Harris, as he played for the opening act. Councilor Yancey overheard my answer and inquired as to who Janelle Monáe was because he had heard the name before. I told him of how Janelle Monáe has redefined the image of women – Black women especially – in music and fashion and has shown that this historically reduced group is more multi-faceted and diverse than previously noted. I also went into a rant on how her music is a mix of everything amazing producing something perfect. After my fan rant, the Councilor stared at me and said we should find some way to honor her because her message is one he has been fighting for during his thirty years as a City Councilor. We discussed ways in which we could honor her, and the Councilor finally decided upon my typing up a resolution and honoring her with a day.

BLAST: What does it mean to the city?

SI: As a “minority-majority” city, the face of Boston is changing rapidly – for the better I would argue. Just for that reason alone, I think it does wonders to the psyche of every Bostonian, but especially women of color and same-gender loving residents. Janelle speaks to the hearts and minds of a lot of people in either community and for the local government to honor someone who views them as human beings filled with love is an important gesture. I think it’s an indication of where Boston is moving toward. I would hope it’s symbolic of where the nation, and ultimately the world, is moving toward as well. Each group has historically been oppressed (and, to some effect, still oppressed to this day). Honoring someone who speaks to their condition and for their liberation is one of the first steps in undoing generations of wrongdoing and realizing a society that respects everyone and recognizes each individual’s worth.

BLAST: Why do you think she is so monumental?

SI: My grandfather used to tell me that I must be myself in all that I do because it is much better that I fail at my own life than to succeed at someone else’s. Listening to her music and seeing her star grow in an industry that mass-produces artists, Janelle Monáehas both avoided living someone else’s life and succeeded at her own. She is the definition of someone who is their own person, and that, in itself, is a monumental feat. It is impossible to put her music, style, personality, career, or beliefs into a neatly folded box. We are told to be ourselves because everyone else is taken, but more and more, many in my generation follow trends and try to be other people in order to be more acceptable. To truly be oneself and stand out and not be ashamed of this is why Miss Monáe is such a truly transformative individual. For that, I, and Councilor Yancey, can appreciate her life and living.

BLAST: What do you hope the gesture conveyed?

SI: It is my hope that the resolution on behalf of Councilor Yancey did two things: First, that Janelle Monáe gained tremendous confidence and encouragement from the fact that her work has not gone in vain and that her message is reaching a multitude of people in various levels of government, business, industry, etc. Second, I hope that the gesture expressed to those in the room and those that consume her music that, at least Boston’s officials are listening to them. People don’t just buy Janelle Monáe’s music because the style is refreshing and compelling; the style, combined with the message, causes fans around the world to be intrigued by her music. Honoring her with the resolution, I hope, showed that Councilor Yancey is aware of how the people of Boston feel and what issues are important to them. For years, he has been championing the rights of people of color, women, and same-gender loving people in the area of employment and housing especially. Should news spread across the nation of this commendation, I envision it taking notice that Janelle and her art are not something to be overlooked. She should not merely be given an award or recognition for her music, but her message should be taken seriously and the issues addressed sincerely. This is what the resolution did. While it recognized her nominations and awards, it was resolved that she be given a day to honor her message and her influence.