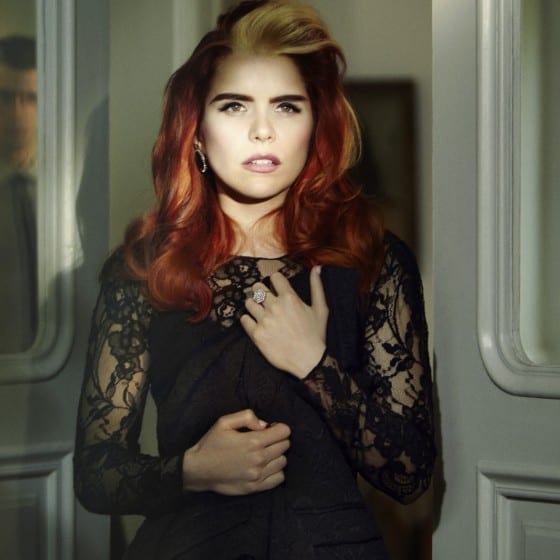 British singer-songwriter Paloma Faith, who released her stunning second album “Fall To Grace” for her US debut in December, has started taking over the US while the album has already reached Platinum status in the UK.

Faith’s upper-range, bluesy and husky vocals are not the only strength that she possesses, however – Her wicked sense of humor and gorgeous theatrical performance are also getting the singer to establish her oddly attractive identity; if she ever owned a planet, she would create the planet “without gravity so everyone can fly. And, in the whole city, there are lots, lots, lots of flowers.”

Despite her unique funny personality, once her fame internationally blossoms as an infectious fast-rising star, the press starts throwing the same typical questions at her over and over: How the US likes her performance, what the album is all about (based on her past relationships and insecurity associated with them), if she might sound like Amy Winehouse, if she would be a new fashion icon, etc. Although she has to go through the same routine at interviews, Faith isn’t bothered that much. “I don’t have any feeling about them. I think they are necessary people,” laughs Faith, commenting on music critics. If Paloma Faith could change one thing about the way music journalism is, however, she “would encourage people to ask questions that writers don’t know the answers to, as opposed to repeating questions, for sure. And, they are ordinary articles [based on the repeated questions].”

“It’s not about getting tired. It’s just about, I think, that it would be much more intuitive, like [it would] turn out as something that everybody don’t know about and it would be more interesting,” Faith suggests even though she doesn’t “really have a lot of contact with the media and all. I don’t read magazines or watch television.”

Paloma Faith will be in the Big Apple to make her new album and her 2009 hit tune “New York” was written after a guy left her for the city. “He went to New York for 3 months and then he came back. And, nothing really [happened afterwards]… I think he had a nice time. We didn’t get back together,” says Faith.

It is highly doubtful that the proud Londoner would fall in love with the city or the US anytime soon. “I think London is the greatest city on Earth! It’s really cool! It’s a good area with a lot of diversity and a lot of great things going on! And, I just love the energy about it. I think you would enjoy it in London and East London. It’s very fun,” Faith energetically explains. “I’m going there (New York City) for a couple of months just to experience it but if I had to choose, I would never live there forever.”

But don’t get discouraged as the latest update on the Miss-Paloma-Faith-and-the-US-affair is, her possible tour in 2013. “I don’t really have anything planned but it will happen. I’m still waiting for the information from the record company and my live agent to see when and where it actually happens but it’s my favorite thing in the world to do so I will do that,” the singer promises.