Go ahead, shoot it.  What’s the worst that could happen?

You’re low on health and can’t remember the last save point you came across. To make matters worse, you’re pinned down behind cover by more enemies than you’ve got rounds in your last magazine. As you come to terms with your demise and prepare to go out in a blaze of glory, you see it. That glorious, ammo-saving, crimson beacon. You don’t stop to wonder what’s exactly inside the thing, or why it’s in an area prone to gun violence. It also doesn’t occur to you that as the protagonist, you’re the least familiar with the universe, yet you’re the only one who knows not to hide behind the obviously volatile hazard. All you know is that shooting this thing will make it go boom, and it will be awesome.

The “explosive barrel” device has been become so commonplace in games, it can be found in nearly every genre. Simple oil drums explode when shot in GoldenEye 007. Compressed cylinders can clear a room in Max Payne, and overturned vehicles in Grand Theft Auto can take out sidewalks full of pedestrians. Standard explosive crates are a hazard in platformers like Ratchet & Clank, and even fantasy titles like Baldur’s Gate are known to feature gunpowder barrels. Regardless of the shape, size, or color of these detonative devices, they all serve the same purpose: to explode in a manner that pleases the eye and annihilates the enemy. 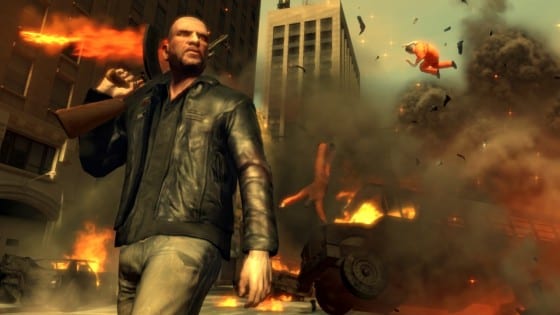 Everyone knows that vehicles are just drivable explosive barrels.

So where does this idea originate? First of all, with such a variety in execution, we need to narrow the field by laying down some parameters. For the sake of this article, let’s agree that the mechanic in question refers to an initially harmless environmental objects that, if acted upon directly or indirectly, will detonate, causing potential damage to the player or enemy.

One of the earliest iterations of this device in gaming predates even the Atari 2600. Released to the public in 1974, the wildly successful Dungeons & Dragons series arguably shaped the video game industry. Although primarily played as a tabletop game, the video game version was actually released the very same year, programmed entirely in TUTOR for the PLATO system. The game featured gunpowder barrels that would explode and cause damage when struck correctly.

I’d back off there, Leo.

Whereas the early days of game programming were rarely officially documented, it’s practically impossible to determine which game was definitely the first to feature a graphical representation of the “explosive barrel”.  However, one of the earliest pure examples of this device can be found in Konami’s Teenage Mutant Ninja Turtles: The Arcade Game. Known by many as a sequel to the first TMNT game on the NES, it was actually released the same year (1989) as it’s console counterpart. The “II” was added to distinguish it from the side-scroller when it was ported to the NES a year later. Scattered about multiple levels of the brawler were destructible environmental objects, one of which was an oil drum. When struck, the drum would smoke for a few seconds before exploding, damaging nearby enemies and players alike.

One of the most famous examples of the device is also its initial implementation in a first-person shooter. Developed by id Software in 1993, Doom featured highly volatile barrels of nuclear waste that could easily ruin the day of anyone within range.  The detonation would also cause other nearby barrels to explode, enabling massive, chained explosions that could lay waste to enormous areas.

Could the extensive acceptance of the “explosive barrel” be attributed to its basis in reality? In a famous episode of Mythbusters, the domestic demolitionists found that the average propane tank cannot actually be punctured by most low caliber gunfire. When a high enough caliber round was used to puncture the device, it was simply destroyed without the desired, fiery ka-boom. To achieve an explosion worthy of a Left 4 Dead, the circumstance must be just right. If a high caliber, incendiary round punctures the target, and said target was far enough away to allow for the round to ignite, boom goes the dynamite!

Unfortunately, due to some pretty lame local city ordinances, I was unable to recreate the experiment myself. However, there is no shortage of inebriated amateurs willing to give it a go on Youtube.  Sadly, according to a plethora of shaky backyard videos, Mythbusters was, in fact, correct. Unless incendiary rounds are used, or the target is already aflame, the combustible contents fails to ignite. It should be noted however that, when punctured, certain gas cylinders will literally shoot off like an unpredictable missile as seen in the Just Cause series! So yes, certain objects such as propane tanks can technically be blown up with gunfire if the circumstances are right. However, in reality, these objects are usually looked after by licensed, trained professionals and not often nonchalantly scattered across hostile environments by irresponsible imbeciles.

As cliched as they have become, why is the use of “explosive barrels” still considered acceptable, nay, expected?  To find out, I went to the source and spoke with a developer whose game Super Amazing Wagon Adventure, features a classic example of the mechanic. Andrew, from Sparsevector, had this to say about the topic:


I think this mechanic is so widely used because (aside from explosions being awesome) there’s something fun about seeing your actions cause indirect secondary effects on the game–when you kill enemies through an exploding barrel you aren’t killing them directly, but instead indirectly by manipulating the environment.  These sort of secondary effects make the game seem more alive and unpredictable.  I think the most fun version of this mechanic is when the exploding barrels cause chain reactions of explosions and destruction.

As previously mentioned, “explosive barrels” come in a variety of forms, yet it’s usually blatantly obvious that damaging the object will cause an explosion. The reason for this lies in objects’ commonalities. Whatever particular form they may take, the exploding objects in question are often red, yellow, orange, or are emblazoned with a dangerous-looking warning label. Behavioral psychologists agree that red, yellow, and orange are universally considered “warm colors”.  The color red, often associated with rage, passion, excitement and danger, is generally considered to be one of the most domineering colors, and has been found to actually escalate the body’s metabolism. Yellow is considered to be the most visible color, and although it is often associated with happiness, was actually worn by executioners in Spain during the Middle Ages. Orange is considered to be a balance of the two, combining their emotion and intensity. The reactions these colors naturally invoke in humans, combined with the general public’s fear of unfamiliar and dangerous substances creates the perfect “explosive barrel” cocktail.

While it may be one of the oldest cliches in gaming, the “explosive barrel” isn’t going away anytime soon. As we’ve learned, it is a simple and effective tool that can make environments seem more engaging and enjoyable.  Furthermore, their basic design leaves players feeling inclined to use them on an almost subconscious level. Using the environment to defeat an enemy, rather than a direct attack, provides players with a shrewd sense of gratification. Plus, when it comes right down to it, causing explosions is just plain fun, which is what gaming is really all about.