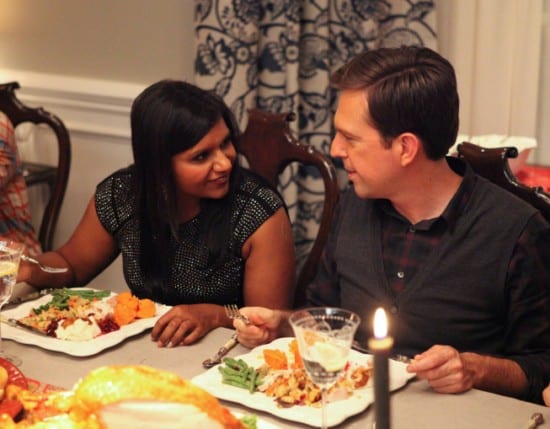 Today, I am thankful for two things: that the bus terminal I traveled from did not completely devolve into The Hunger Games, and that this episode of The Mindy Project was actually completely enjoyable. While it’s still not the best comedy going on TV right now, I feel like this episode solved a lot of the problems that I’ve been having all season.

To start, this episode gave us a great peek into the relationships that the characters who are not Mindy have with each other as well as with her. Morgan accompanies Mindy to Gwen’s house to help cook for Thanksgiving, Betsey takes Jeremy to her parents’ house for the holiday, Danny spends time alone in the office, and Shauna—well, Shauna’s not really in this episode since she’s spending her Thanksgiving sampling mini-bars around Atlantic City with her friends. Obviously this was written pre-Hurricane Sandy.

The episode shifts back and forth between the three subplots, but for simplicity’s sake, I’ll talk about them each as a whole. Mindy’s is the main plot, of course, and her story starts before Thanksgiving. Josh cooks tilapia with a Red Bull glaze for her on a panini press, and it’s exactly as gross as it sounds. They start to talk about their holiday plans when Mindy realizes they haven’t talked about being exclusive yet.

Josh attempts to duck out of the conversation, and ends up being saved by the power blowing and the panini presses setting the kitchen on fire. He attempts to shirk responsibility for putting the fire out as well, clutching his wine and retreating to behind Mindy, who picks up a candle to “fight fire with fire” into the opening credits. Okay, it’s not as funny written out, but seeing Josh be so typically avoidant even in an actual emergency was a fun jab at his personality type.

Mindy and Morgan take the subway out to Gwen’s (gorgeous) house, and he gives her relationship advice while picking at the shrimp platter he’s brought as a gift. An actual person sitting next to me on the subway eating shrimp? I’d move seats immediately. Morgan doing it? Made me giggle. He’s such a bizarre person, but I’m glad the writers keep him grounded as a human by showing that he truly cares for people he’s friends with.

In a surprise twist, Mindy’s once-failed date Dennis (Ed Helms, who should guest star on this show more) is at Gwen’s party too. He emerges gracefully from upstairs and promptly slips and falls down the rest of the elegant staircase. It’s almost a little cliché to break the cliché of grand staircase entrances by falling, but that doesn’t make it less funny here. I especially liked this moment because afterwards Mindy actually addresses the fact that he should be seriously injured. I feel like the dark side of slapstick humor never gets addressed in situations like this, and I appreciate that they did here.

Mindy and Dennis flirt with each other, and it looks like she’ll be making good on the whole non-exclusivity thing until Dennis’s young hot girlfriend shows up. Turns out they met right here through Gwen and her husband Carl. I almost forgot we finally met Carl because he doesn’t say much. Maybe we’ll see him again soon to make up for it, since we know almost nothing about him.

Mindy confronts Gwen about setting her ex-date up with another woman, and Gwen confesses that she thinks Mindy’s kind of a mess right now and wasn’t right for Dennis. Ouch. Tough love from the usually bland Gwen, I like it. Mindy, ever the drama queen, ends up putting on a snazzy dress from Gwen’s closet and rejoining the party, complete with continued flirting with Dennis.

The two of them (Mindy and Dennis, not Mindy and Gwen) end up making out in the den in front of the fireplace. How rich do you have to be to have multiple fireplaces? Gwen walks in on them, which leads to an all-out brawl of a confrontation between her and Mindy. Everyone downstairs can hear the shrieking, but Carl says it just happens every few years or so, and they proceed to see how many pushups Morgan can do in a row to pass the time.

Josh calls Mindy mid-fight, and she confesses to Gwen that she’s really upset that he doesn’t want to be exclusive when she does. She’s embarrassed because she really is a mess, but Gwen helps her out and hits redial. Josh is at a strip club with some of the players he reps (though none are in the shot with him), but he only misses Mindy. He’s kind of a d-bag in the way that he admits he wants to be exclusive—the phrase “keep it zipped” is used more than once—but the overall intent is sweet. Who knew Josh had more than one kind of skeezy layer? Mindy happily agrees to be exclusive, and at dinner, she and Dennis decide their makeout session never happened.

The stars of this week’s B plot are Betsey and Jeremy, a friendship I didn’t know I wanted to see until this episode happened. Jeremy’s family is obviously overseas in England, so Betsey has invited him to spend Thanksgiving at her place. She warns him that her family is not nearly as sophisticated as he is, and complains that they still treat her like a child.

Jeremy, to his credit, is unfazed by the stark differences between himself and Betsey’s down-home kind of family. He gives them a box of fancy chocolates, but they all spit them out after her grandmother declares the candy to have gone bad. I thought Betsey was exaggerating about how her family treats her, but her dad gives her a glass of strawberry milk instead of a beer, even when she asks for one. Oh, and they call her Betsey Bear. Jeremy plays along, happy to be included and to receive a hideous Hawaiian shirt from Betsey’s dad, but Betsey’s last straw is being asked to sing something called the “Gobble Wobble” song that she made up as a kid.

She storms off to her room (which, to be honest, probably isn’t helping her case of trying to be treated like an adult), and Jeremy comes to talk to her. He tells her that he wasn’t even treated like a child when he was one, and it sounds like he was the go-between for his parents’ divorce when he was ten. He thinks she should just go with it when she’s home for those few times a year. I disagree with his logic a bit, since Betsey is an actual adult and should be treated as such, but I like that they’re developing a real friendship. Betsey heeds his advice and heads downstairs to sing the “Gobble Wobble” song, and I am eternally grateful we only heard a couple seconds of it.

Danny occupied the C plot of the episode, spending Thanksgiving alone in the office. It’s his choice; he was invited to a dinner party by another doctor we’d never seen before, but he turned it down for his chance to be alone. He practices “Piano Man” on a keyboard in his office, watches the game on the TV in the break room, and attempts to befriend the break room mouse. Wait, how sanitary is it that there’s a mouse running around a doctor’s office?

Anyway, Danny seems to be enjoying himself for a while. He even manages to nail that verse of “Piano Man” he was working so hard on, and he pumps his fist in triumph, only to be greeted by the squeaks of the mouse. The shot of him alone in his office with the rest of the office dark and empty around him was pretty powerful. I know I have a negative view of Danny in these reviews (and let’s face it, some of his behavior completely warrants that reaction), but to get the visual of what his life is like in that one shot made me rethink my opinion.

I still maintain that he should get over some of his attitude problems (like tormenting Mindy about her weight), but I hadn’t considered the impact of his negative reactions to people. I don’t think Danny has any friends besides people he’s close with through work, and I don’t know if it’s entirely by choice or because he tends to be a little awful to people when he has conversations. Now I want to find out. I can’t believe I’m saying this, but I kind of want a Danny-centric episode where we get to explore why he is the way he is.

The ending of the episode borders on cheesy, but whatever, it was still my favorite part. The real audio for “Piano Man” takes over after Danny plays it, and there’s a montage of the group sharing photos with each other of their Thanksgivings. Morgan takes a picture of himself with the turkey carcass and texts it to Betsey. She takes a picture of her dad and Jeremy asleep on the couch in their Hawaiian shirts and sends it to Shauna, who sends a picture of her and her friends posing with a minibar to Mindy. Mindy sends a group shot of Gwen’s party to Danny, and we circle back to him alone in his office. He responds “Happy Turkey,” and looks utterly miserable until he gets a text back and he smiles. Guess he might want companionship after all.

“Thanksgiving” was my favorite episode so far. If the show can keep up with equal development of the characters’ relationships (and, you know, actually include Shauna) and veer away from humor that gets too uncomfortable, I think The Mindy Project could still shape up to be a pretty good show.

Josh: “I don’t know, maybe all these years of drinking nothing but energy drinks has left me legally taste blind.”

Betsey: “I come from a long line of pretty lame people. My ancestors got beat up on the Mayflower.”

Mindy: “Dennis, what are you doing here?” Dennis: “My own stunts, apparently.”

Mindy: “Speaking as a doctor, you should be dead, but as a person, that was hilarious.”