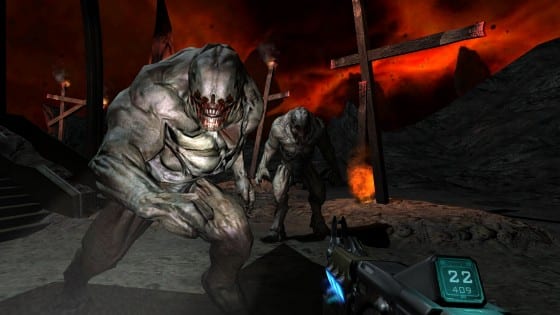 It’s hard to believe that Doom 3 is almost ten years old, but then, even when the game came out it had a decidedly retro feel to it. Bethesda and iD have brought together the history of the series in this lower- priced re-release of the game and as an historical artifact, there’s a lot to like in the BFG Edition. The disc contains Doom and Doom II, along with the original Doom 3, the Resurrection of Evil expansion pack, and seven new levels called the Lost Mission.

So, for $40 (or $30 on PC), there’s a lot of ultra violence here. While Doom 3 and RoE did make incredibly decent appearances on the original Xbox, this is the first time the game has seen daylight on modern consoles. Added to the package is a terrific Dolby Digital 5.1 remastered soundtrack and stereoscopic 3D support on both console platforms.

The former adds a lot to the Doom 3 experience, since audio cues are so important to the overall design of the game. It’s clear a lot of effort was put into the game’s soundtrack—both during the original release and now. Doom 3’s ambient effects add a ton of creepiness, but also are imperative for survival,since the rest of the game’s design is entirely fixated with monsters popping up behind the player.

The 3D effects aren’t quite as impressive unfortunately. While the Xbox 360 simply doesn’t do 3D very well, even on the PS3, the 3D feels tacked on and hardly there. This is disappointing, since good incorporation of 3D would have added even more atmosphere. Either way, the game’s architecture and monsters still look excellent, if largely lifeless.

Even when Doom 3 was initially released, it wasn’t exactly cutting edge design. iD took the basic design philosophy of their earlier games and simply added a shinier paint job. To that end, Doom 3 is rife with monsters hiding in closets or simple teleporting right behind the player. It’s a weak, slasher-movie mechanic that makes little sense (how did all those zombies even find that many closets to hide in?), but works well enough for the mindless shooter motif.

The biggest design change between earlier Doom games and Doom 3 is the inclusion of a story and occasional human characters. Somewhat humorously, even the living human characters look like zombies, but the story is serviceable for a game with puzzles that are purely about hitting switches. None of these complaints are new of course, but then again, no one ever bought an iD game because they wanted intellectual stimulation.

Where iD always succeeded was in solid shooting. It’s here that the BFG Edition is oddly hit and miss. The feel of the weapons, the pacing, and the violence are terrific. The demonic minions are still great and die with absurd amounts of cartoonish gore. What’s odd is how frustratingly inaccurate the guns feel, even with auto-aiming assistance. Though certainly not unplayable, there’s a distinct feeling of inaccuracy whether using an assault rifle or close-range shotgun. The PS3 version feels slightly tighter than the Xbox, but both versions are mostly equivalent in all regards.

Doom 3 BFG Edition is worthwhile as a virtual museum for one of the industry’s most important series.The games are still fun, with plenty of creepy atmosphere and fast-paced action. While Doom 3 was never a great game, it’s a solid choice for those in need of a shooter fix even with the few nagging issues this version suffers from.[amazon_link id=”B008E6ZXRM” target=”_blank” ]Doom 3 BFG Edition[/amazon_link]